Los Angeles Could Use a Few of These 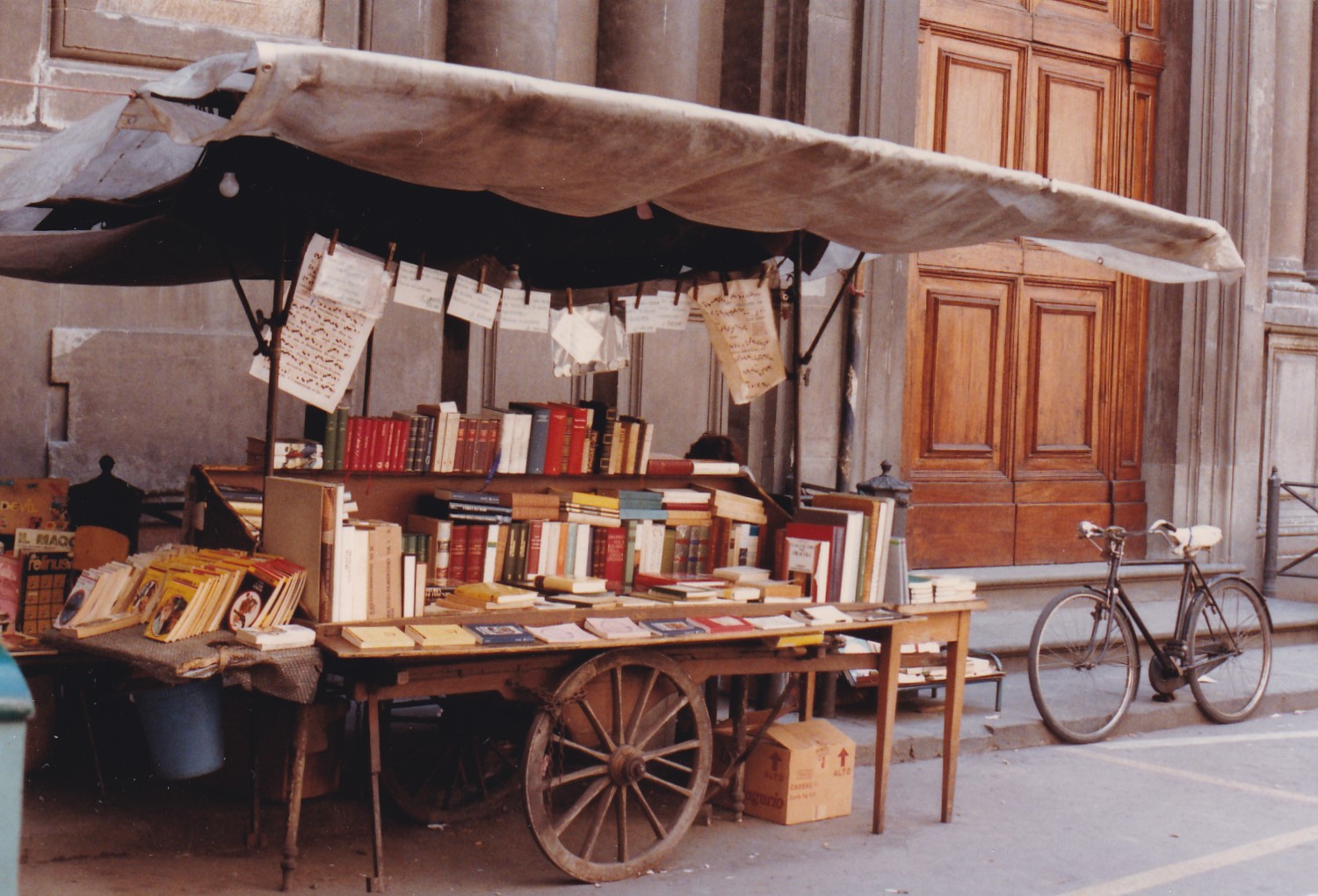 This Photo taken by Bookseller Arnold Herr:  He writes: >>  I looked through Bookstore Memories the other evening and saw your article on book carts in Europe and your request for other pictures.  Here’s one I took in May 1987 in Florence, Italy.  It stood outside the Medici Palace and was just down the street from a penzione I was staying at while in town.  Feel free to use it.

Thanks much, Arnold, we love the book carts.  Pre-Pandemic (seems like a different lifetime) I was occasionally stopping by the Goodwill Outlet store near DTLA.  They had carts similar to the ones in London, basically just a giant drawer on wheels.  Most of the carts were full of clothing, a couple with other junk, and maybe 10 filled with books.  It was madness, the clerks would push out a cart and everyone would have to stand back about 3 feet.  Then the clerk would yell out “OK” or “Go for it”  and the mob would attack the cart, stuff flying everywhere.  The book scouts who were looking for textbooks were the worst, they would just fling  books around.  Many books were shredded by this insanity, spines broken, dust jackets torn.  Picture a pack of Jackals in Africa, plunging into a lame antelope, biting and snarling at one another, occasionally nipping off a piece of meat, the poor antelope giving a final cry and then dying of fear.  That was the Outlet store at its finest hour. Minor injuries were common. Yelling at jerks very common.

I did occasionally find a nice pamphlet or book, but it was not always worth the physical abuse and the evil thoughts of what the fate should be to the reckless bozos throwing textbooks at each other.  The price was right, 75 cents a pound.  Back in the good old days of the early 1970s I used to go to the warehouse of one of the Thrift chains and buy books and magazines by the pound.  Magazines were 10 cents a pound and books were 25 cents a pound, and there was a staggering amount to plow through every day.

So a couple weeks ago I stopped by the Outlet to check the book scene, it was open, although there was a line to get in, and masks were required.  I waited about a half an hour, which isn’t so bad because all the libraries are closed and many of the few remaining bookstores are shuttered.  I got in and there was only one cart with books, an abysmal selection of junk, I couldn’t even make a mercy buy.  So much for the good old days of book mayhem. Social distancing has put an end to the mob of vultures.  At least back then you could get a few things. The carts of literacy are just more victims of the declared pandemic. Our culture may not be far behind them, rolling toward oblivion on broken wheels.