Stumbling around my crib on a recent early Saturday morning, I settled into my command center’s decrepit seat-sagging swivel chair with a cup of coffee, hoping to wake up enough to answer some email.

9 a.m. Time to punch up Steve Eisenstein’s Saturday morning internet radio show from Florida on WDBFradio.com. I was half listening while trying to get my old HP to fire up. Steve was running some kind of contest, something about “who was the author who just sold his old typewriter for over $37,000?” Hint, he wrote a book called Lonesome Dove. Glugging down some coffee woke me up a bit. Suddenly, my mind replayed an old flashback from some 15 years before.

One of my close friends, a wild and eccentric bookseller named Barry Cullwell, had decided to pull up stakes and move to Nevada. He was mainly a wholesaler and consistently came up with great loads of books. He had spent a year building out a very unusual bookstore very close to the Los Alamitos Race Course, one of his favorite spots. His bookstore included a fancy cigar humidor cabinet, which he had built entirely by hand. For Barry, it was approaching Southern California nirvana: A well-stocked bookstore, a side line of fine antiques, a large cigar humidore, and walking distance to the track, a place that he spent quite a lot of time, which is why it took him a year to build out the store.

He had a grand opening. I went down and bought a pile of books. The next day, Barry closed the store. Like for forever. It was sad, really, a fine shop loaded with good books, and a year’s work, and open only one day. But something had come up and he was moving to Nevada. He put his house up for sale and his girlfriend put her condo on the market. He emptied the book store and moved all his books up to the house and piled them in with all the others. The house, the condo, the garage, all packed tight, and I mean really tight. He called me up and said “I’m moving, find me a buyer for all these books.”

I had heard that Larry McMurtry was trolling around the country buying books. He had bought the town that he had grown up in, sniping off the buildings one by one until he owned them all, and then started filling the empty storefronts with books. It was a grand scheme, but the drawback was that the town was somewhere in Texas in the middle of nowhere. Even if you got to the place, accommodations were slim, so show up in your RV or with a sleeping bag. This was a destination for only the hardiest of book geeks.

After dialing McMurtry’s various book stores around the country, I finally made contact and he said he would love to look at the massive Cullwell load during his next trip out to L.A.   A few weeks later, he arrived, and I met him for lunch.

McMurtry was a Southern gentleman, and we got along just fine, until I asked him what was in the box he was trundling with him. He said it was his typewriter. I asked him if he was going to drop it off at a thrift store. This was the first of my many annoying foux pas of the day. McMurtry patiently explained that he wrote all his books using one prized model of a portable typewriter, a Hermes 3000, and he always carried it with him, with clones of the same exact model stashed around the country in various places that he visited or lived. “I’ve got 9 or 10 of these,” he cheerfully explained, “and keep one in every book shop that I own, plus reserves in various apartments and other places.” He was without a doubt, the Hermes Typewriter Company’s best promoter. Too bad they were out of business.

We got into a low-key but sometimes heated discussion about the virtues of using a computer as the greatest writing instrument ever invented. He didn’t see it that way. He had written all of his novels on the old Hermes. Plus, he had also written over 40 screenplays, all by pounding the portable typewriter. To me, at the time, it was beyond belief that anyone would prefer to do that much writing on some clunky old typewriter. I had grown up with them, and had used them myself, but when I got my first look at a computer, that was it. I never wanted to see or use one of those dreadful machines ever again.

McMurtry could not be convinced by any argument from me, he had of course heard them all before. His mind was made up. In fact, he seemed to be a little superstitious, like a baseball player who has to use the same exact bat, or make the same weird motions to ward off failure. To him, Hemingway, Steinbeck, and others could not be wrong. They all loved the Hermes portables. I got the feeling that he felt that if he used something else then he might write a dud of novel. In reality, that was not going to happen: he is America’s great storyteller. There is no way he’s going to fail because he switches to a computer. But maybe he thinks it would go that way, so why take a chance?

I got to thinking about it later, and came up with a couple of reasons to use a typewriter. Since erasing something is so damned hard, using white out or one of those tough pencil typewriter erasers with a brush on one end, one might become a little more cautious, think a little more clearly about what’s going to be put on the paper, and in what order. A manual typewriter might actually improve somebody’s writing by making it such a pain in the butt to erase a mistake that you would go out of your way not to make too many of them. Plus, some of the really good machines, like his Hermes, had a nice feel to it when properly tuned up.

I couldn’t convince myself to dump the computer and go back to a manual typewriter. I love my computer, the laptop is the greatest. In its day, the Swiss company that made Hermes (and watches, and music boxes) were the among the finest designers and manufacturers in the world. But by the early 1980s they were gone. Like Barry Cullwell’s bookstore. Like forever.

But Larry McMurtry is a sly one. When he put 2 of his beloved machines up for auction recently, he knew that the typewriter was not just a machine, it had become an icon. The machines that churned out the great novel Lonesome Dove, were beautiful, magical icons. The 2 Hermes brought $37,500 at auction. It is doubtful that any computer he could have used at the time would bring anything near that amount. Larry McMurtry laughed all the way to the bank, which might have actually been a long way if he was holed up in his ghost town in Texas. And, he admitted, he still had about 15 more of them stashed away or still in use! If the rest of his army of Hermes brings about the same money, he could be looking to raking in over $200,000 for them. Hey, that’s why icons are iconic!

Back to the radio show. After the above had flashed through my sleep deprived brain, I called the show with the answer to the question of the day. I won the contest. My prize was a beautiful signed copy of The Penitent, the wonderful story by Isaac Bashevis Singer. 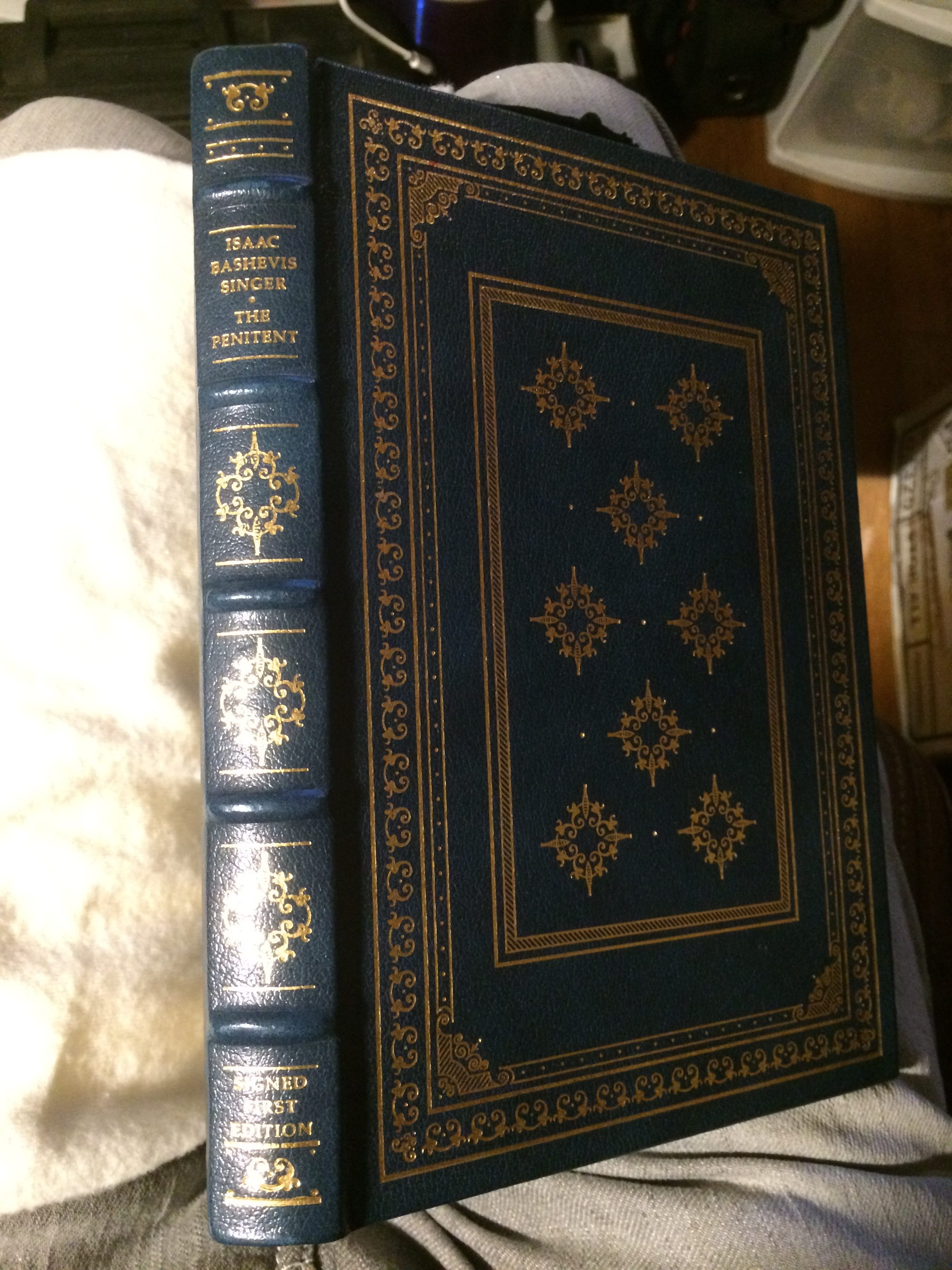 The two days I spent with McMurtry were certainly the highlights of that long ago year. Endless book chatter with a legendary bookman is not soon forgotten. Another argument I lost with him was in trying to get him to open up a book store in Los Angeles. My sales pitch about the glorious Southland could not sway him to leave his town in Texas. He also ended up not buying the Cullwell collection, so I didn’t collect a commission on that deal either, although it was sold soon after to another bookseller. I don’t feel bad about losing all the arguments to McMurtry – any writer who can get over $37,000 for two old typewriters is a giant in my view. Bill Gates eat your heart out, you lost to a Hermes, but many grateful thanks for the PC, I love it dearly as do billions of other earthlings. Except maybe for one guy in Texas.