Sometimes you just have to shake your head in disbelief and wonder just how stupid some of the executives at big corporations can be?.  How did these morons ever rise to their positions?  Why do executive boards continue to pick guys to run a book company who have no experience in the book business?  More importantly, why hire a CEO who has no understanding of the field the company is in?

Barnes and Noble has had a series of mis-steps in the last couple of years.  The previous CEO decided that what was needed was for the bookseller to open up restaurants and bars inside their stores. They thought it would be nice to have folks sipping wine and browsing through the stacks.  A bad idea if there ever was one.  The stores are big on children’s books and young adult books, the last thing they need is a bunch of drunks or tipsy fobs populating the aisles.  They have opened several “test” locations but I think that idea will be a wash out.  The executives behind that bold move were canned and a new crowd brought in.  Things have gotten worse.

The flamboyant Milo Yiannopoulos has a new book out, called Dangerous.  Say what you want about this ever fascinating, outrageous self-promoting and offensive author, but he is a popular guy in some quarters. He was so controversial that a big gang of thugs did major damage to U.C. Berkeley do keep him from speaking.  The home of the Free Speech Movement.  Yeah, right.  No more “free speech” in that neighborhood. Enter the big bookseller Barnes and Noble.  Not to be outdone by the Berkeley street gangs, they have refused to stock Milo’s new book “Dangerous”.  This move of censorship opens a big area of discussion, and disgust with B & N.

How many times have we been down this road?  How many Henry Millers have caused crushing censorship?  How many displays in public libraries across the land to make controversial material available?  How many headline-grabbing legal battles?  How many years has the American Bookseller’s Association put on their famous “Banned Book Week” promo?  Booksellers know why.  It’s in our basic bookselling genes to have available the many different ideas of our culture and in fact all political and cultural ideas put out in books.  So B & N won’t stock the book “Dangerous”  They will “order” it for you, but not actually have it on their shelves. This is the big achievement of the new regime at B & N, censorship by refusing to stock a controversial book, in this case, a book called “Dangerous”.

The word in Wall Street circles is that B & N may be up for sale.  Maybe one of the reasons is that they don’t have anyone leading the company who knows a damned thing about selling books, or the ethics of bookselling, or why booksellers and libraries should have books that are not necessarily “popular”.  So who is reaping the benefits of this lunacy?  Amazon, of course.  “Dangerous” has sold over 100,000 copies online, and is a best seller in many parts of the book world.  The cash is flowing into amazon.com coffers.  Does B & N somehow think that people are going to flood into their stores because they are NOT stocking “Dangerous” ?

Meanwhile, that wild and crazy guy Milo, is putting on one of the best promo campaigns you will ever see.  TV appearances, street guerrilla theater in front of the other sad sack in this case, Simon And Schuster publishers, who pulled out of the book deal with Milo and is now being sued, has lost face, and has lost a small fortune.  Simon and Schuster, now owned by CBS, which also owns Pocket Books, Scribner’s Sons and Athenium, seems to have caught the censorship disease first, even before B & N. The drama goes on every day, with Milo on Facebook, Milo in the News, Milo taking shots at B & N for not stocking the book, Milo dancing in the streets of New York with his followers. Sales of his book get better and bigger.

All of a sudden, the financial analysts and bean counters are trying to figure out if B & N stock is worth more than eight bucks a share.  And oh, BTW, amazon.com is selling for over $1,000 per share. Looks like another brick and mortar headed for boot hill, in this case helped along by their own insane doings. 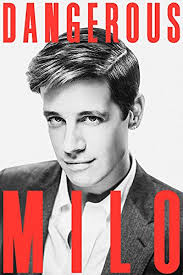