Being edgy, cruising on the event horizon between  extreme kulture and downright madness was something Adam consistently sought and attained.

I’m very sad that my friend Adam Parfrey has passed.  He reportedly died on May 10th, but there is no comment on his facebook page as to tthe cause of death.  His publishing companny, Feral House, was in Los Angeles for many years.  I had actually met him before he founded FH when he was connected to AMOK Books, which dealt in books that were on the fringe of pop culture, conspiracy,  psychology, crime, and the bizarre.  Their catalogs, if you can find one, are a treasure of information and knowledge. 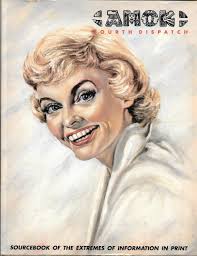 For a while,in the 1990’s AMOK had an open bookshop at1764 N. Vermont Avenue in Hollywood.    I remember it to be a small shop, kind of long and narrow.  They might have split the rent at one time with a notorious group, the Man-Boy outfit.  This may certainly have run off some customers.  I remember the Man-Boy section ran along the north wall of the store, and I was personally put off by the display.  Anyone actually putting into practice what they were promoting could find themselves in prison for a long time. Maybe Adam and his partner just needed someone to share the rent, but also maybe Adam just did it to attract a bunch of publicity; it is still something of a mystery to me. Adam would push boundries and do things for effect and attention.*  This includes some vaguely anti-semitic things at times,like publishing a novel by Nazi Propaganda Minister Joseph Goebbels. Adam’s mother was Jewish, so it just sounds a little weird, and he didn’t believe in any of it, but was a master at publicity and marketing, especially to the youth market of pop culture. Being edgy, cruising on the event horizon between  extreme kulture and downright madness was something Adam consistently sought and attained.

Adam was in the used book business at one time, so we shared a lot of insight.  He too had wrestled with mounds of rejects from the Goodwill and other charities.  An interesting experience only known to a few in the entire world.  He was a frequent visitor to my book shops, and we had some great conversations. For a while Adam operated out of an office in downtown Los Angeles.  He eventually moved to the Silverlake area into an iconic structure that served as his office as well as appearing to be a Kultural Church.  It was one of the coolest buildings in the City, in an area of previous metaphysical activity and a fitting place for the House of Adam.

I helped with research on Bill Nelson’s important Hollywood’s Hellfire Club, finding some treasure troves of material for the book. During this time  I also helped Adam obtain a painting he badly wanted from the estate of one of the prominent members of the Bundy Drive Boys, it was an original John Decker. Although there are no acknowledgements of any of this in the book, I got lucky and was able to track down a large cache of material on the Bundy Drive gang.  I prowled through some garages and estates in the Hollywood Hills and was able to supply a great deal of material to Bill Nelson for the book, including a scrapbook of Sadakichi Hartmann on his famous “Perfume Concerts” in New York at the turn of the previous century. I believe Bill gave this to Adam and it may still be in his collection.  If anyone at FH finds it, send it to UC Riverside, it belongs in the Hartmann archive. 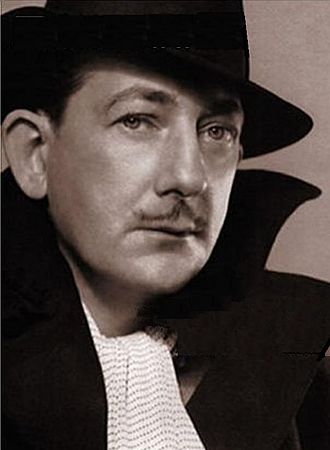 When John Decker’s house in Brentwood was going to be demolished a big celebrity bash was held by the worman who lived there, who I think was Decker’s assistant.  Invitations were sent only to the big celebrities, of course leaving out booksellers and researchers. My solution to the invitation snub was that I crashed the party with actor Jed Rowen (The Ghastly Love of Johnny X).  I wrote about the evening, with a lot of photos of the event, on What Up Hollywood, click here if you want to know about Decker’s great pad.  An update to the story concerns the front door, which is pictured.  It was hand made by Decker.  The woman who sold the house took it with her, and before she died of cancer a couple years ago she sold it. The purchaser was a Hollywood author and collector, so it is in good hands, saved from the wrecking ball.. Click here to see the photos Jed and I took, including those of the front door.

Adam was somewhat eccentric, which is why and how he managed to build the greatest backlist of popular culture I’ve ever seen.  The folks writing these books were usually on the fringe, and Adam could relate to them on an equal and intellectural basis  He truely enjoyed the company of many of his authors.  He was genuine and treated them as friends, building trust.  He was greatly respected by the authors, and they delivered the quality that he sought.  I really don’t think any modern day publisher, no matter how much money they have, can ever match the incredible line-up of titles at Feral House.  Take a look through their titles on the FH website.  As long as you live, you will never see a better list in the genre.  I wonder where the company goes from here?  Since Adam moved away from L.A. a few years ago I haven’t heard much about who, if anyone, has been groomed to carry on.  Doing daily business routine is not what is important.  Who can connect to the authors, who can dig out the great stories, who can push for quality?  Adam did it instinctivly, smoothly, beautifully.  He loved his authors and they loved him.  (With a few exceptions, even Adam could screw up once in a while and act like a dick, but hey, who hasn’t done that?}

One of the edgy events that Adam put on was at the old Silent Movie Theater on Fairfax Ave. in Hollywood.  It was to launch Timothy Wyllie’s book “Love, Sex, Fear, Death, The Inside Story of the Process Church of the Final Judgment.”  Included at the event was a re-inactment of one of the religious group’s occult rituals..  The Theater was packed and Adam at his best.  Timothy Wyllie sold and signed a lot of books.  It was one of the strangest events I’ve ever been at, but a complete success for Adam and FH.

The problem the last few years was that Adam had moved to the boonies in Washington State to grow his own food in case some of the dire predictions in his conspiracy books were actually going to come true. He had also recently married, I don’t know if his new bride pressured him to move or not.  I tried to dissuade him of this in the strongest terms I could.  I even wrote him a personal letter about it.  Adam had become L.A.’s Bad Boy Publisher.  The new media loved him.  He or FH were constantly featured on the pages of Los  Angeles publications.  His books pushed the envelope and that prompted more interviews.  He held Salons at his house, events like the one at the Silent Theater, and was himself sought after by the media for interviews.  My view was that if Adam moved out of Los Angeles to rural Washington, then he would no longer be L.A.’s Bad Boy, he would become just another out of town publisher, albeit a great one.  Eventually, the media would forget about him to some extent.  If you’re  an L.A. boy then by God you had better be living in L.A.  The City is a possessive mistress.

So Adam moved anyway.  The media frenzy cooled.  He was no longer on the cover of the Weekly or other local publications.  I think the event with Tim Wyllie happened shortly after his move, but he came back to L.A. to launch the book.  The truth is that Port Townsend, Washington is not L.A.  It may have its own charms, but  turning your back on L.A. is like spurning a woman.  No good will come of it, and Adam’s spell on L.A. was broken.  Like it or not, L.A. is where it’s at..  This is one of the  centers of the universe in a literary sense.  It’s a huge book market.  It’s buzzing with literary activity.  The filmmakers are here, musicians are here, authors are here. His many friends wanted him to stay in L.A.  We loved him and didn’t want to lose him because he was an important part of our lives as well as a focal point of cultural activity.  But Adam ditched it all for some peace and quiet, a change of lifestyle, and to grow vegetables.  (Personal Disclosure: Don’t send any vegan hate mail.  My girl friend and I are in a community gardern and we grow vegetables here in L.A  And BTW, we are not waiting for armageddon, we are eating all the little fuckers now.)  We have to respect his decision, but I also think it may have long-term played a role in his death.  He had certain health issues.  L.A. is world class in medical help.  He was famous for over-working and not taking care of himself.  I think if he had paid more attention to his health, been in Los Angeles to take advantage of the great medical facilities here, he would possibly still be alive instead of dead at 61. That’s just my opinion, subject to change if I hear further information about the cause of his death.**

I remember a really funny incident.  We had a book shop in Burbank called Movie World.  One day I happened to be in there instead of down at Atlantis where I normally hung out.  In comes Adam.  I took him out to the lobby of  the shop and showed him this enormous pile of  thousands of 8 x 10 photos that my partner had just dumped on this cart.  I knew Adam was always looking for movie stills of his father, whom he revered.  I reached into the massive pile, grabbing a batch of the photos, and on top was a great photo of  his father in a movie scene. (The only photo of his father in the entire pile.)  Wow, was Adam happy.  What a one in a million coincidence!  He was also happy about  the price:  25 cents!

Adam Parfrey zipped through our lives with a quiet intensity.  A tornado was usually following him, throwing out some of those classic titles that blew our minds and expanded our consciousness.  Rest in Peace friend Adam Parfrey.  You are still L.A.’s bad boy in my book of life.