Front of Shop Restored From Attack by Vehicle 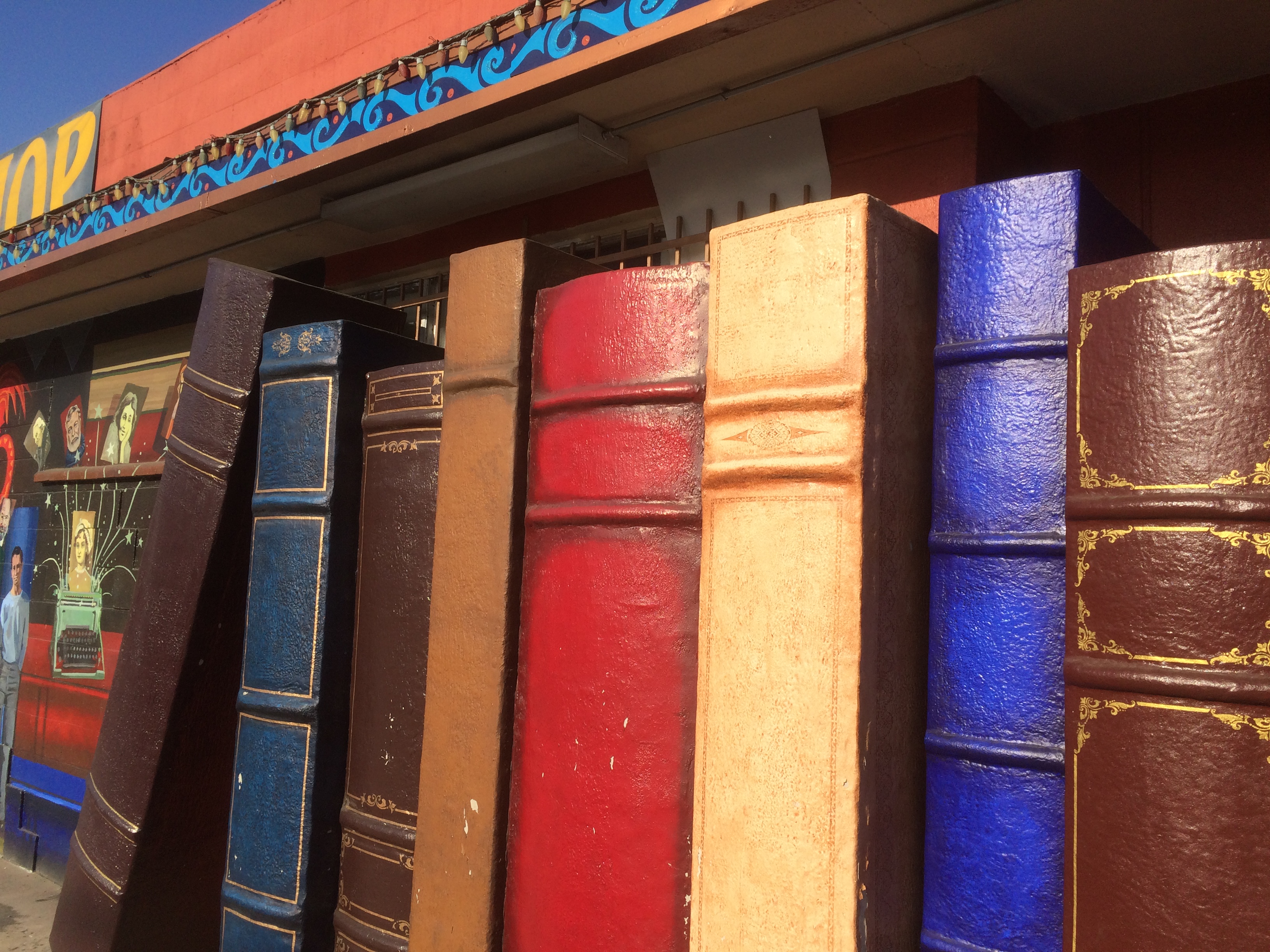 Look back on our archives to January 22, 2015 to see the incident of a car that was hit in in the intersection of Chandler and Cahuenga and sent crashing into Iliad Bookshop’s display of Giant Books outside the front of the shop.  The car was the loser of the crash, with damage to the front end, but the books took a beating and were torn down and replaced with a whole new row of colorful tomes.

In addition, owner Dan Weinstein added two fabulous murals along the building’s facing sides on both Cahuenga and Chandler. We all remember the great mural on his old location on Lankersheim.  Sadly, only a small portion of that is left, the rest were painted out by incoming businesses.  Below are some photos of the new books and portions of the murals  The fantastic murals on both locations were done by artist Paul Dilworth.  Click here to visit his website. Dilworth is a London artist who paints portraits of houses and London Life.  His latest murals on the Iliad show the fantasy and whimsy of literary characters, so next time you visit Iliad Bookshop take your camera with you. 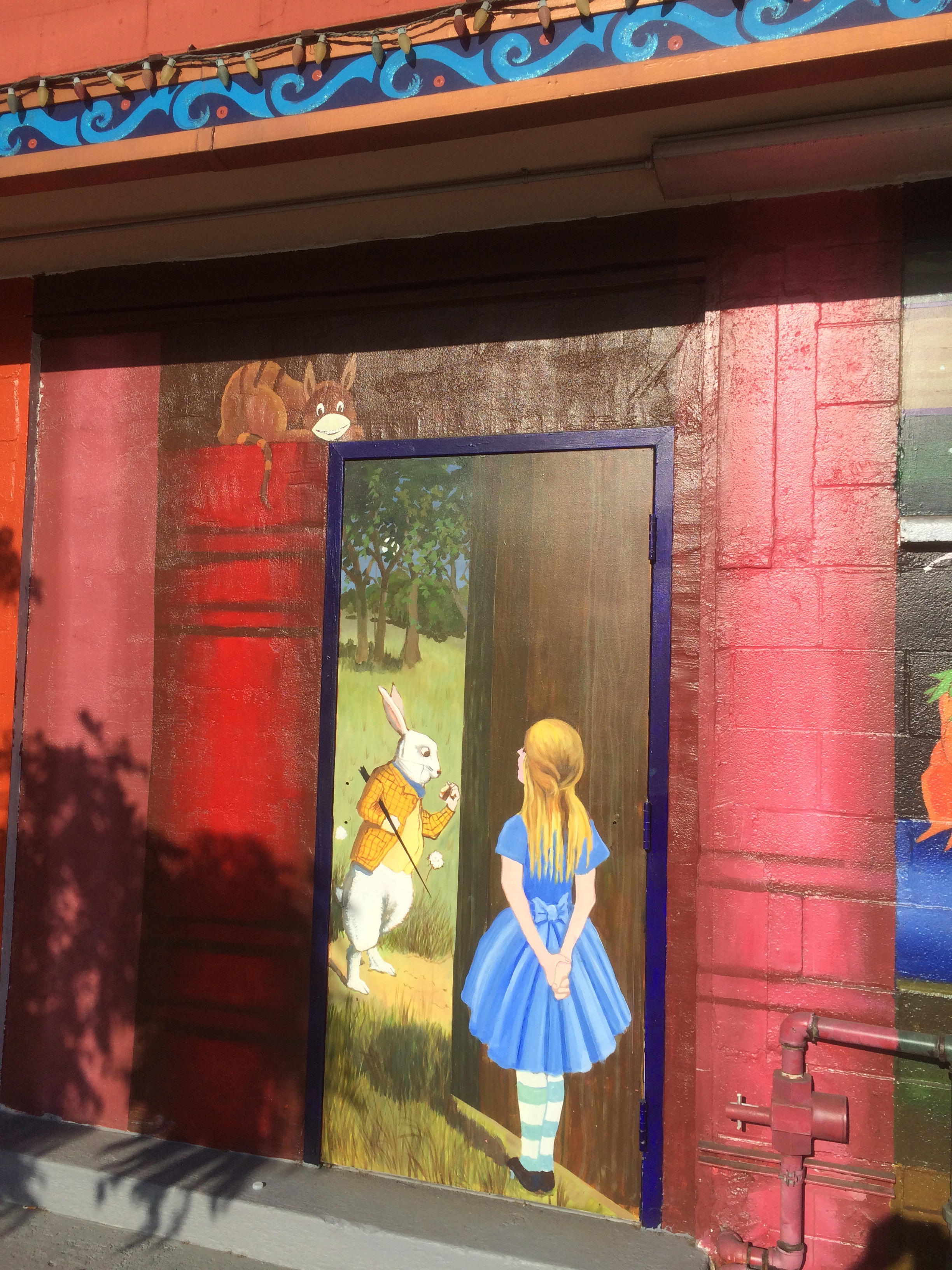 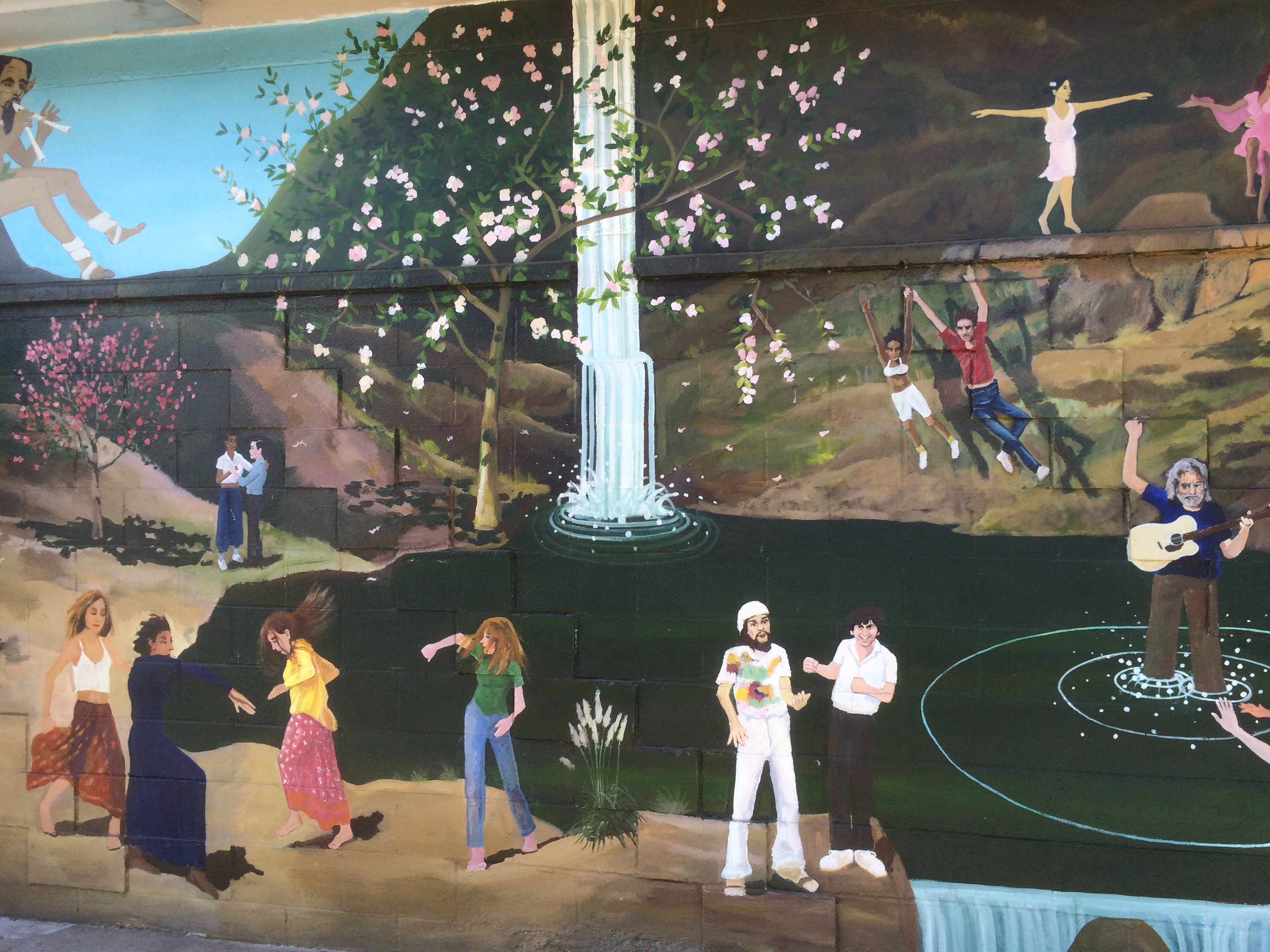 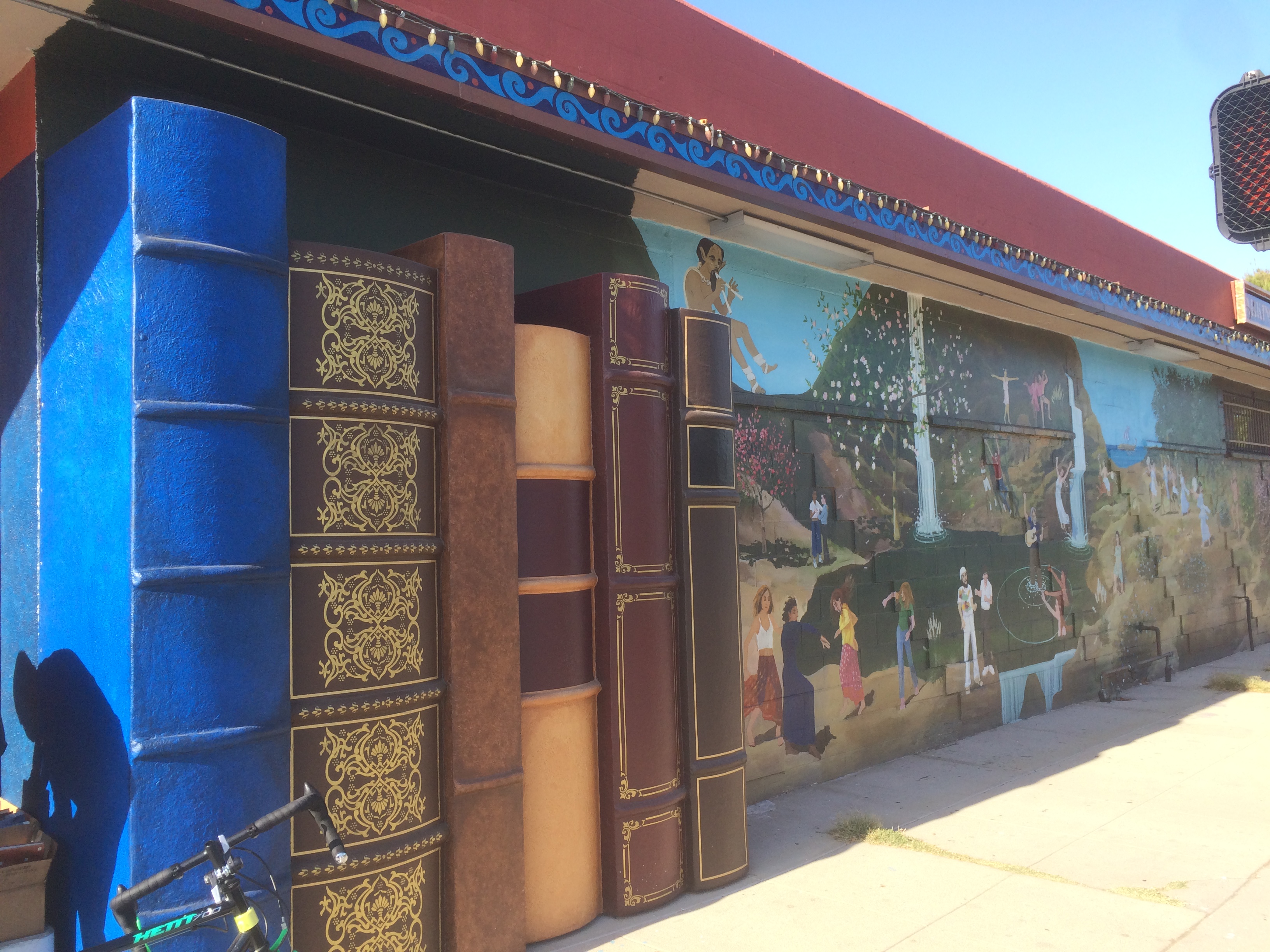 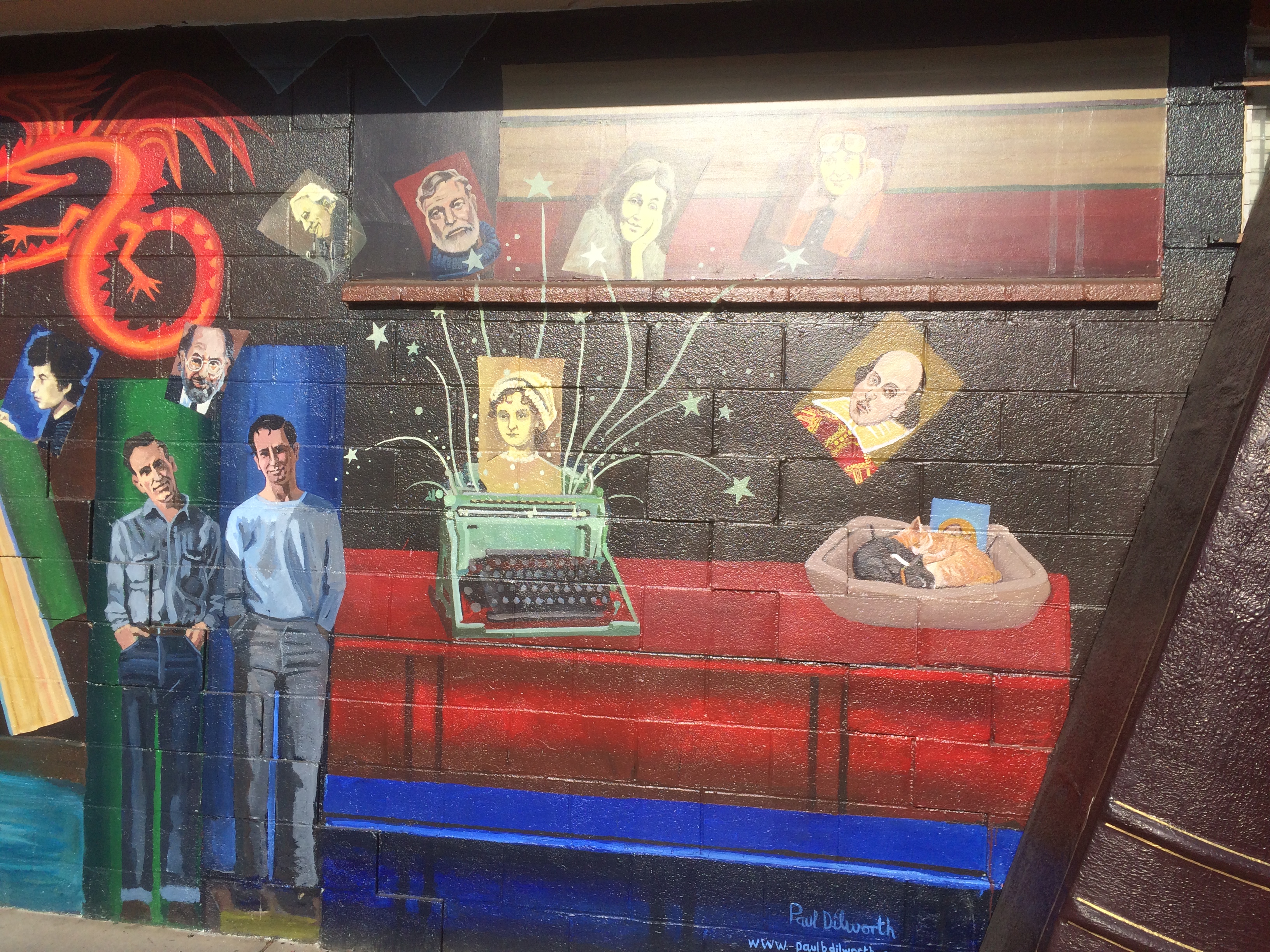 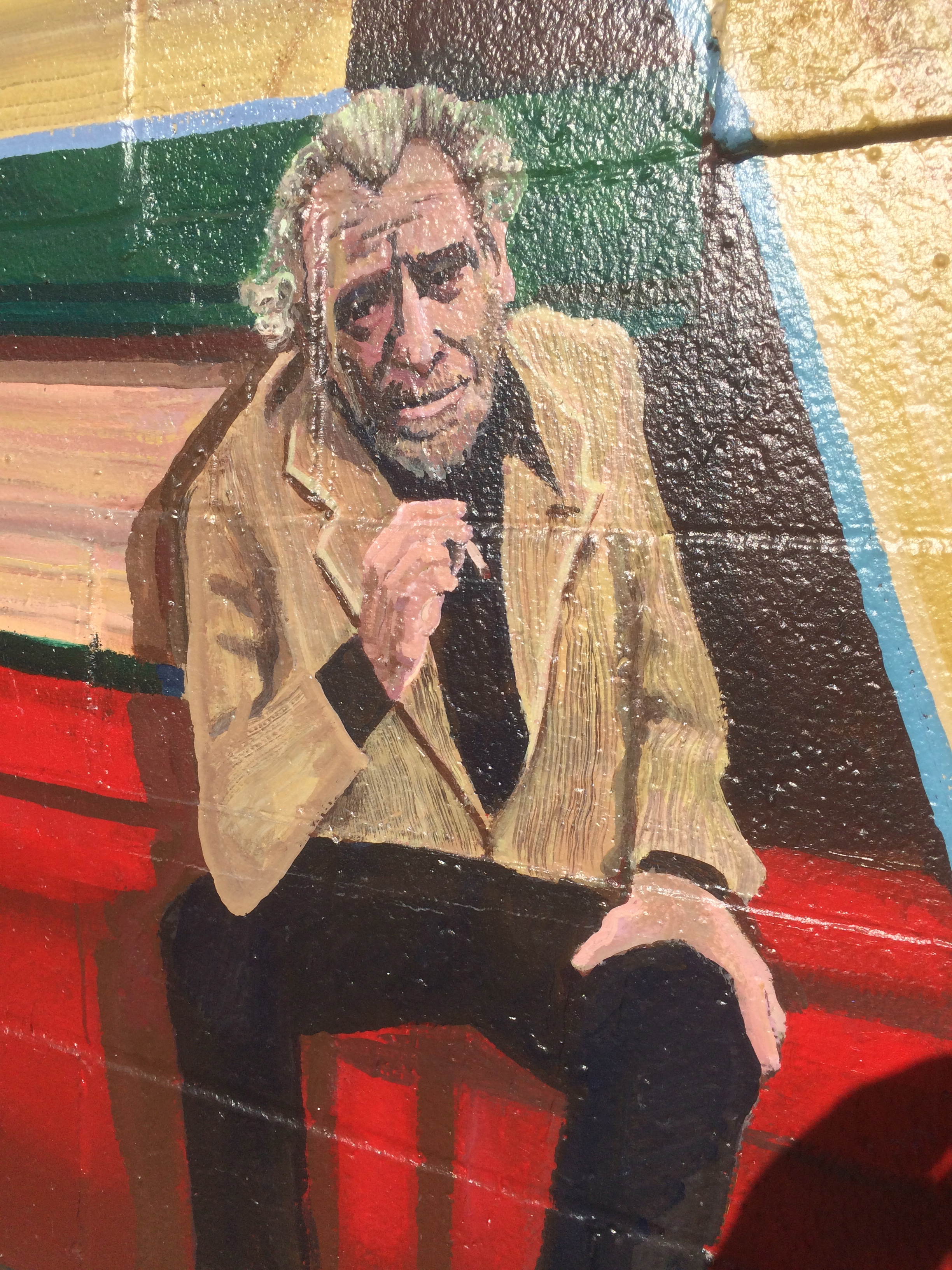 And finally, L.A.’s own Bukowski, having a perpetual smoke outside the Iliad. He seems to be saying “boy, a nice cold beer would be good right now.”

Just Another Zany Day in L.A.

This is probably a first:  An auto, T-Boned at the intersection of Cauhenga Blvd. and Chandler in North Hollywood, was sent spinning and crashing into the front of The Illiad Bookshop’s outside wall, which featured 10 foot replicas of antiquarian books.  The books, made of wood, plaster, paint, and lord knows what else, took a beating, but the car was the clear loser.  One wag wondered if this was a re-enactment of some bygone Ralph Nader safety test.  This is Los Angeles, so anything is possible, although the fact that real people were in the vehicles instead of crash dummies, would seem to be a little reckless for a test crash. 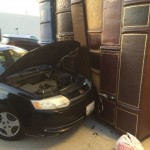 The giant books that adorn the sides of the bookshop are so realistic that one of the old timers watching the activity from his sidewalk perch commented that the front of the shop reminded him of the sets on the movie Intolerance.  The shop remained open during all the commotion, customers crunching their way through small bits of plastic debris and stepping over pieces of fiberglass fenders to get up the small steps to the front door.  The two kittens who prowl around the shelves all day were sound asleep in their baskets at the front counter, the events not even worth a kitty yawn.  It was business as usual inside, boxes of books brought in, sales being made, customers asking for specific books.  Nothing seemed disturbed inside.  Maybe the giant books are actually Magical Totems, warding off any real harm to the inside of the shop, fiercely guarding the grounds against any monster machine intruders.

To see the short video on youtube.com,  click here: