Continuing the Survey of Hollywood Bookshops in 1976

A note about the photos.  About the time I originally wrote this article, my friend Wayne Braby offered me his glorious photos of the Hollywood Bookshops you will see in this article, never before published to my knowledge.  Wayne was in contact with Muir Dawson of Dawson’s Book Shop, and I have a letter from Muir discussing the possibility of Wayne writing a book for Dawson on the subject of the Hollywood book stores.  I don’t think this project was ever completed, hence Wayne gave me his photos. Wayne Braby was a bookseller, specializing in Military History.  When I knew him, he was working out of his house in Santa Monica.  His wife was a librarian in Santa Monica, a very literary family! I hope you greatly enjoy these wonderful photographs showing a long-lost world.

Getting back to the subject at hand, all the shops on Hollywood Boulevard have the same problem to a greater or lesser degree, so I would like to propose a solution to this over-crowding phenomenon.  It can only be met by an aggressive policy of continuous expansion, i.e., get more books then get more space then get more books and so on.  The bookshops will slowly expand until they are adjoining one another, and the future will bring the glorious scene of Hollywood Boulevard becoming one giant bookstore, all connected with interior passageways.  You could enter at, say La Brea, and not surface again until a week later at Argyle.  Pack a snack.

(Note how wrong I was on that prediction.  Wishful thinking to the max.  There’s now only one bookstore left on Hollywood Blvd., Larry Edmunds, specializing in motion picture history.  All others gone, a near complete wipe-out of our past cultural repositories.)

But for now you will have to be content to hoof it up and down the street, seeking out the bookshops individually.  To help you with this chore, I will take you on a short guided tour, possibly introducing you to some shops that have until now escaped your attention.  We will start on the north side of Hollywood Boulevard from Highland and go east until we reach Argyle, then return on the south side of the street.  You will probably need several days to accomplish this when you do it for real; it is not a feat that can be performed in one day and also be enjoyed, unless of course, your will power is like unto Superman and you are the only person on earth who can walk into even the smallest bookshop and resist the urge to browse thoroughly through the beckoning stacks.  The mere mention of Superman brings us to our first stop, COLLECTOR’S BOOK STORE, aka BENNETT’S, home of the rare comic book.

The bronzed plaque embedded into the front of the entrance-way carries an odd slogan in Latin that reads, “bene Agimus Vobiscum.”  I am told that this means, “Where the good deals are given.”  Collector’s originally started in business on Wilcox, just north of the Boulevard, about 1965.  The owners are former high school teacher Malcolm Willits, Leonard Brown, and Mark Willoughby. They moved to their present location in 1968, where they now hold forth as one of the great rare comics dealers.  The well organized store also holds an awesome amount of movie memorabilia, including movie stills, posters, scripts and fan magazines.  The more that one million movie photo stills are all categorized for easy reference both by star name and movie title.  The 50,000 or so movie and television scripts are also well categorized  The poster collection even includes one of the very first movie posters, circa 1912, from an obscure movie that was filmed by Edison.

If you happen to be into science fiction,, check out the tremendous collection of back issue science fiction magazines  Since this year is the 59th anniversary for Amazing Stories, you may want to pop in and pick up the first issue, dated April 1926.  Bring a bank loan officer with you. 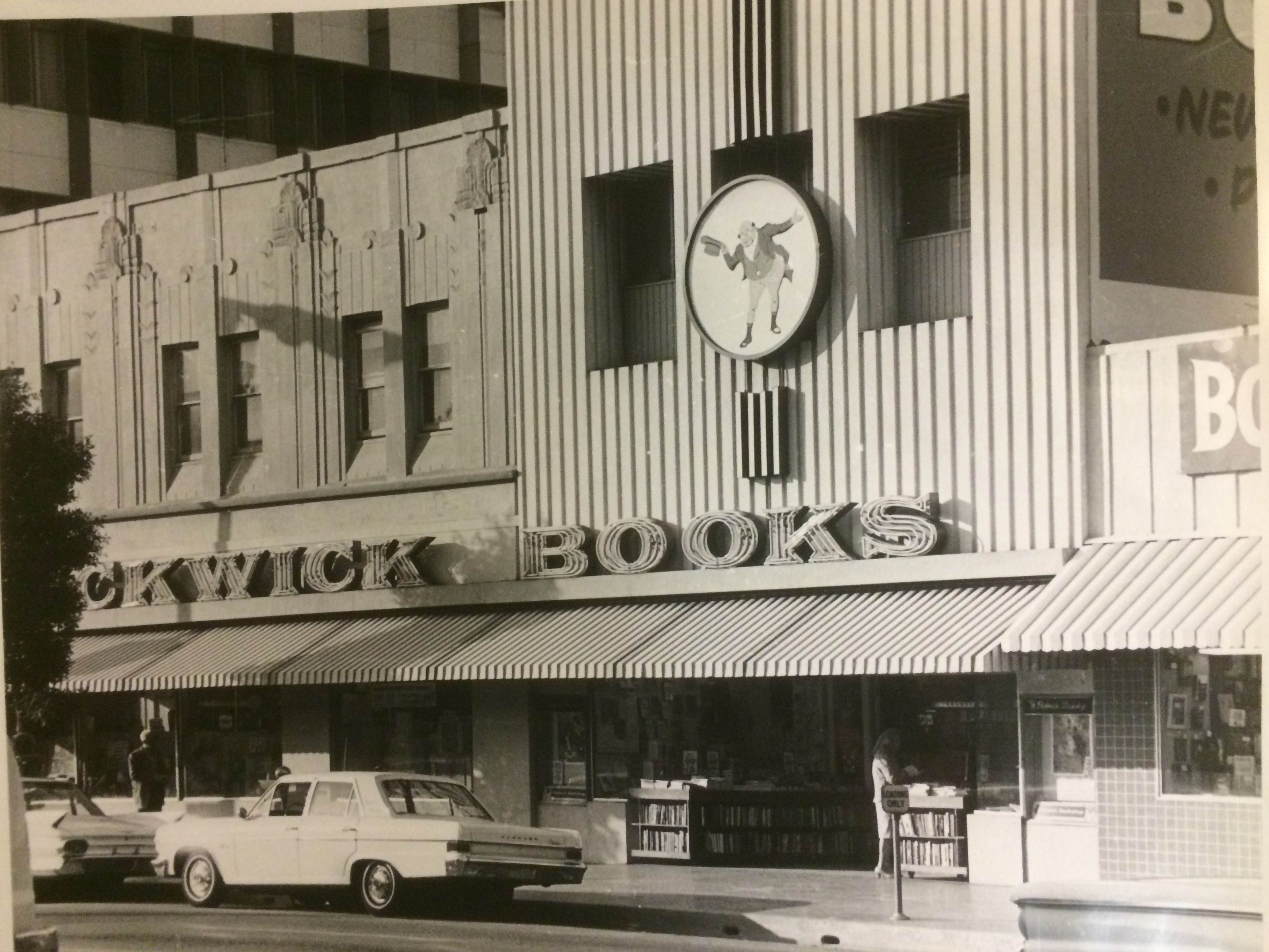 Next we come to PICKWICK BOOK SHOP a store so well known that I can add very little.  It is now owned by B. Dalton, a giant national chain of bookstores.  It is certainly the supermarket of books, for here one can find an enormous selection of new paperbacks, hard cover editions, best sellers and remainders.

But the store was not always like this.  The behemoth of a book store began in a very small way in 1925 when Louis Epstein purchased a tiny bookshop that was actually attached to a gunsmith’s shop in Long Beach.  The man who sold it to Epstein gave him some parting advice on buying used books:  “Don’t ever pay more than 10 cents for any book.”  Epstein used to recall that advice got him thrown out of some of the best homes in Long Beach.

He eventually moved to downtown Los Angeles, calling his store Epstein’s Used Books. His shop was near the old Dawson’s, and Epstein could watch the constant stream of folks going into Dawson’s, with little spill-over into his small shop. Epstein dealt in literature and poetry, but was having a hard time of it, all the while seeing his neighbor Ernest Dawson doing a pretty good business with a lot of the L.A. trade passing through his doors.  Then fortune smiled on Louie.  A movie studio came in and wanted to rent 5,000 books.  When pressed for a rental amount, he blurted out 5 cents a day per book.  The studio folks were happy with that, and Epstein wrote up a rental document, which was to last for 30 days.  Time passed, and the books were never returned. Epstein called a few times but was given the run-around.  About a year later a truck pulled up in front of his shop and dropped off the 5,000 books that had been used by the studio as set props. The studio sent him a check for the rental for 30 days.  After some phone calls, protesting that they owed him $250. per day for 365 days, the studios said “no way, we only needed them for 30 days.  Sorry that we forgot to send them back on time, go pound sand.”  Epstein phoned his lawyer instead.  The attorney extracted the full amount from the Studio, a very substantial figure. Their lax business practice cost them nearly $100,000, big money in the 1930s.  When Epstein called his attorney to collect the money, his lawyer refused to give it to him.  “If I give you this money, you’ll just spend it foolishly buying more books and having a good time.  So here’s the deal:  you go find a building to buy and I will release the money into escrow, that way at least you will own your own store.”  And that is how Louis Epstein ended up owning the building on Hollywood Blvd. that became the mighty Pickwick Bookshop, opened in 1938 and concentrating on selling new books and remainders.  Mr. Epstein sold his interest to B. Dalton a few years ago. 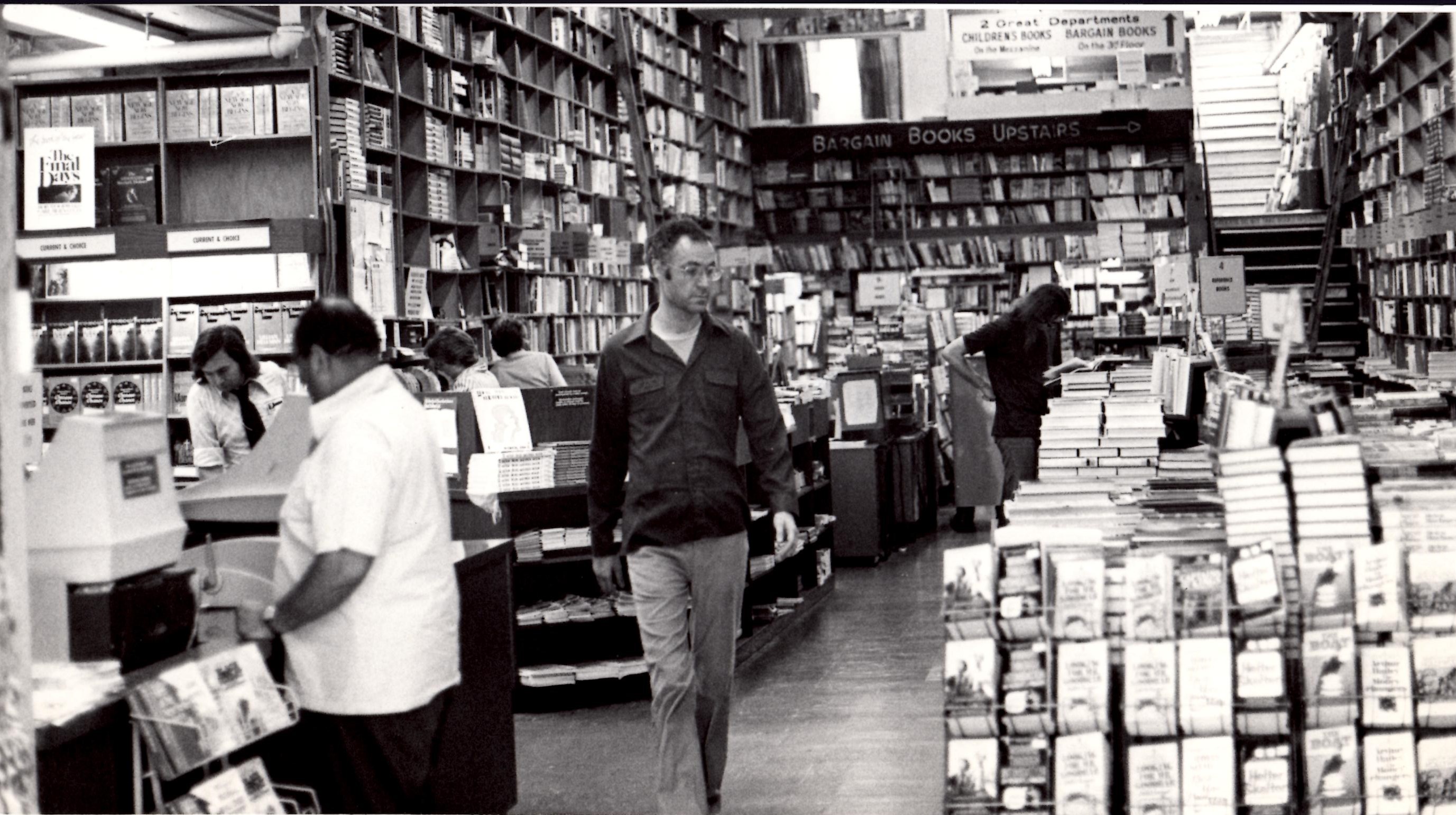 A great shot of the inside of Pickwick.  The stairs on the right led up to the top floor which was loaded with stacks of remainders, many from the U.K. 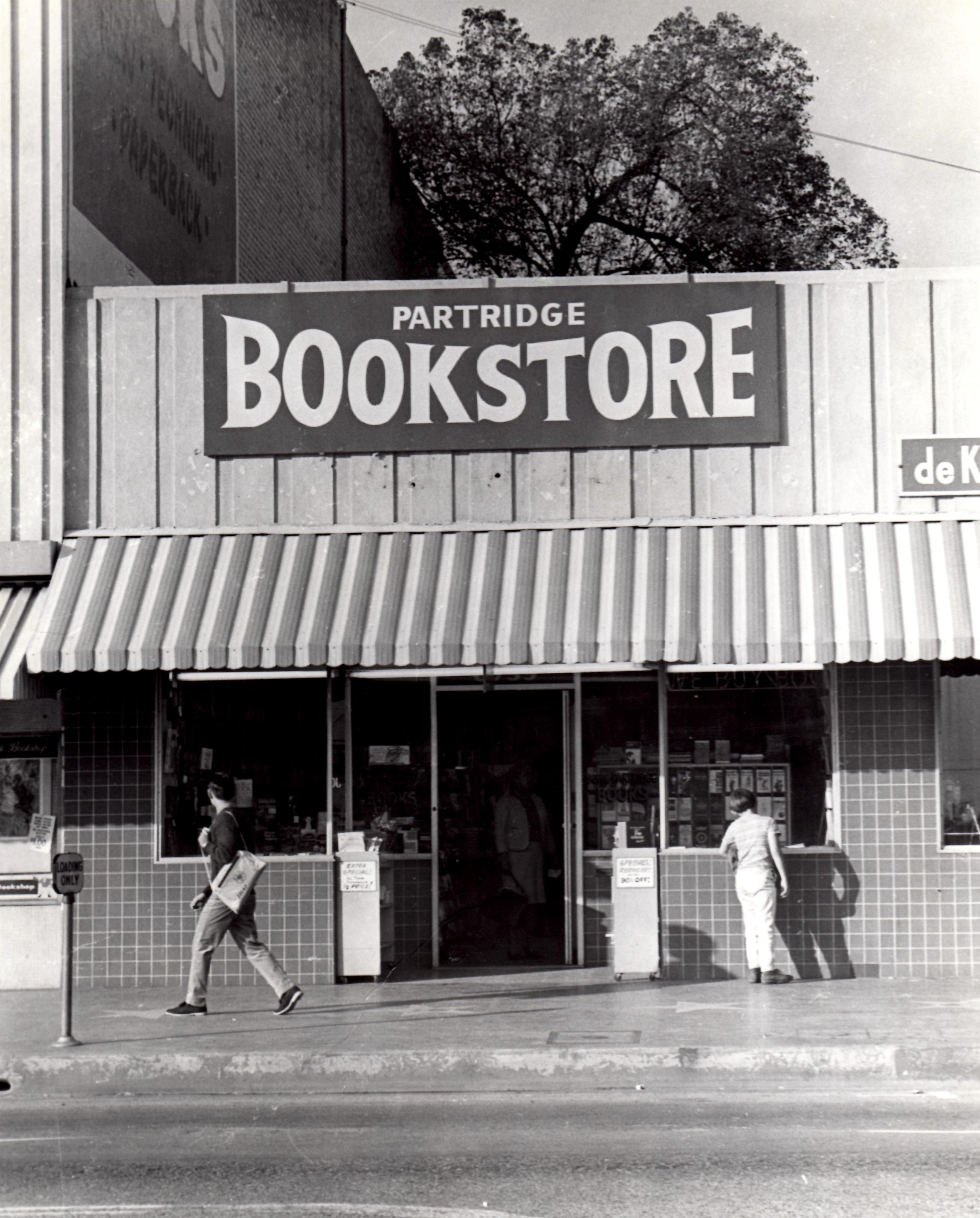 Nestled right next door to Pickwick is our next stop,PARTRIDGE BOOKSTORE.  For fifteen years Partridge has treated folks quite nicely and become a minor landmark.  A passerby will often notice that around the hour of 3 p.m. a small, growing knot of book buyers begins to line up in front of the store.  The anxious looks on the faces of the patrons reveals some silent prayers (or curses) to the almighty that Jim Hubler, the owner, will be a little earlier today than he was the last time.  Why do all those people wait here rather than go to the obvious elsewhere?  Simple.   Everything in Partridge is discounted, including all the paperbacks.  A large selection of new books, with lots and lots of science fiction paperbacks makes it a pleasant, and thrifty, place to shop. 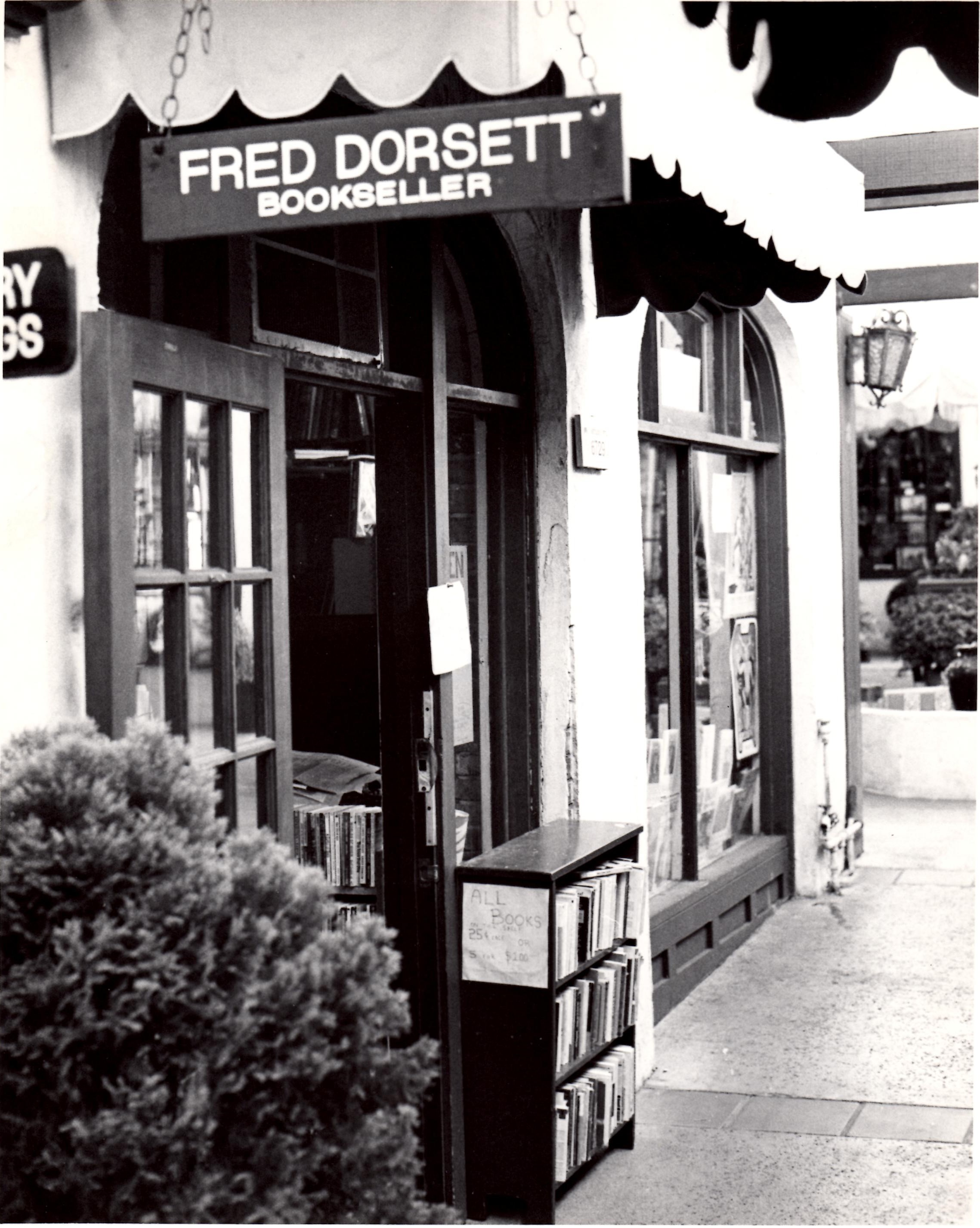 Next is FRED DORSETT, BOOKSELLER.  This store is located off the Boulevard inside the Artisan’s Patio, an alley-like mini-craft center containing, among other things, a leather shop, jewelry store, and candle shop.  Dorsett has been there about four years, specializing in used and out-of print books about books, printing history, small press books, metaphysical and occult.

In the olden days about a hundred years ago, bookmen were often publishers and printers as well as booksellers.  Dorsett is helping to carry on this tradition.  An author himself, his great interest in poetry has led to the audacious project of publishing a book of poetry entitled “Gold Coast.”  Working in his spare time with friend Rob Budinger, the book is being produced entirely by hand, using hand-made paper and printed on an ancient Imperial Press that is lodged in one of Rob’s spare rooms.  As was demonstrated to me one evening, the printing is very time consuming, taking anywhere from five minutes to an hour per each individual page, depending on just whose side the gods happen to be on that day.  The book will then be bound entirely by hand and sold in a strictly limited edition.  This type of production is a slow process; the book will take about a year to produce.

Meanwhile, Dorsett has plenty of adventures to occupy his time, including roaring through the scores of estate sales on the week-ends, hitting the hundreds of library sales, and rooting through the books that are brought into the shop by book scouts.  Sometimes, just getting to work is an adventure.  One recent Sunday, Dorsett arrived at the Artisan’s Patio early to get some books priced for sale.  As he put his key into the outside gate a slight movement on the other side of the gate caught his attention.  He stared through the iron bars of the gate in disbelief: a large, fully grown lion was sitting in the shadows looking straight at him!  “I slowly turned the key back to lock the gate and backed away, unnerved and shaking.  I wasn’t prepared to go in there and be lunch for Mr. Lion.”  The owner of the big cat showed up a few minutes later, apologizing. “He probably wouldn’t hurt you, he’s usually pretty mellow” he said, dragging his pet down Hollywood Blvd. to his car.  “Yeah, right” said Dorsett.  “Tell it to the Ringling Brothers”.

Moving on a few doors, we come to THE BOOK TREASURY.  The store has been operated by the present owners about two years.  Jon Gentilman and Bob Weinstein.  A warm, pleasant shop it is richly paneled and neatly organized, the books evenly lining the shelves like the Queen’s guards waiting for marching orders.  The specialties here are science fiction (hardbacks only), modern first editions, Americana and illustrated books.

Certainly the most interesting piece of Americana in the shop at the moment is a handwritten letter from George Wythe, one of the signers of the Declaration of Independence.  Dated November 24th, 1763, it is addressed in a clear and beautiful hand to one Henry Tucker of Norfolk, Virginia.  Wythe was seeking to have Tucker post a bond guaranteeing the costs that would occur in a suit brought by an alleged friend of Tucker’s.  Wythe remarks at the end of the letter that if Tucker does not know the man involved, “you will be kind enough to pardon this freedom and let me know who is his friend”  History, as far as I know, does not record Tucker’s answer, but it does record quiet starkly that Wythe himself could have used more friends.  Someone he trusted poisoned him, and he received the dubious distinction of being the only signer of the Declaration of Independence to be murdered! 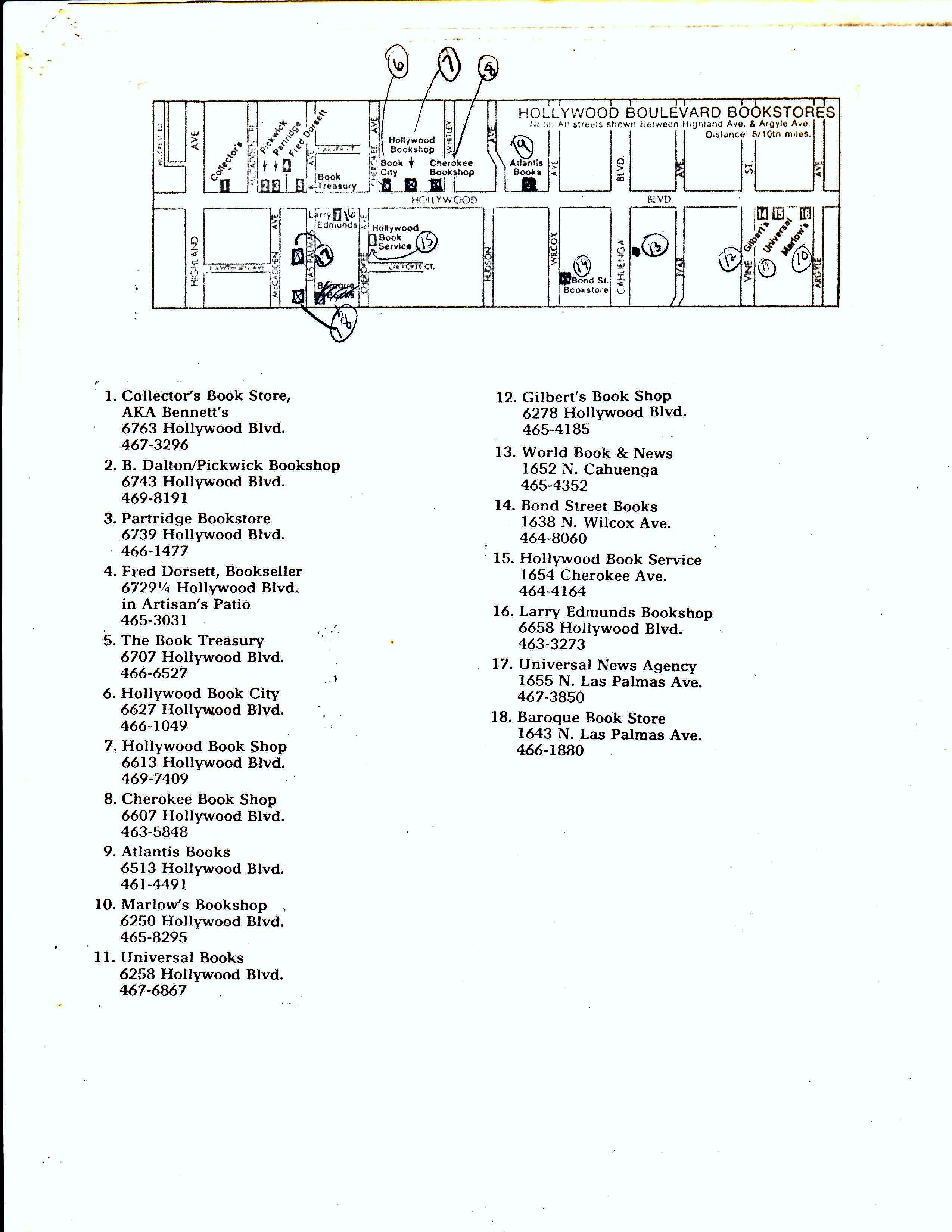 Map with notes of shop locations referred to in the article.