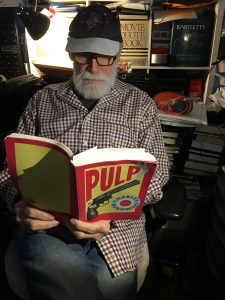 Bill Nelson from Oddball Books gave me his worn copy  of Pulp to read while I was recuperating from a recent medical incident.  He knew I was at the old Los Angeles Free Press during the days when Bukowski was writing his column “Notes of a Dirty Old Man.”

A lot of the young writers at the time loved Bukowski.  He was a fresh voice and we couldn’t wait to see his latest outrage.  Although he was loved by a lot of the writers of that era, none of us  thought that the public at large was ready for him.  We were wrong, and a few years later, a big chunk of  the literary community had latched on to his rising reputation..

Pulp is a fun read, but it is not just another private eye book and  Nicky Belane is not just another gumshoe, he is “Hollywood’s greatest private dick.”  He is also a world class drunk.  He is drinking on every page, everywhere he goes, which includes every dimly lit bar within shouting distance.  Bukowski was having fun with this, mocking every private eye mystery in every way possible.  Private dick Belane drank so much that about half way through the book I briefly thought about heading out to an AA meeting just to keep my sanity.  Luckily, my old friend Sol Grossman was on my mind. 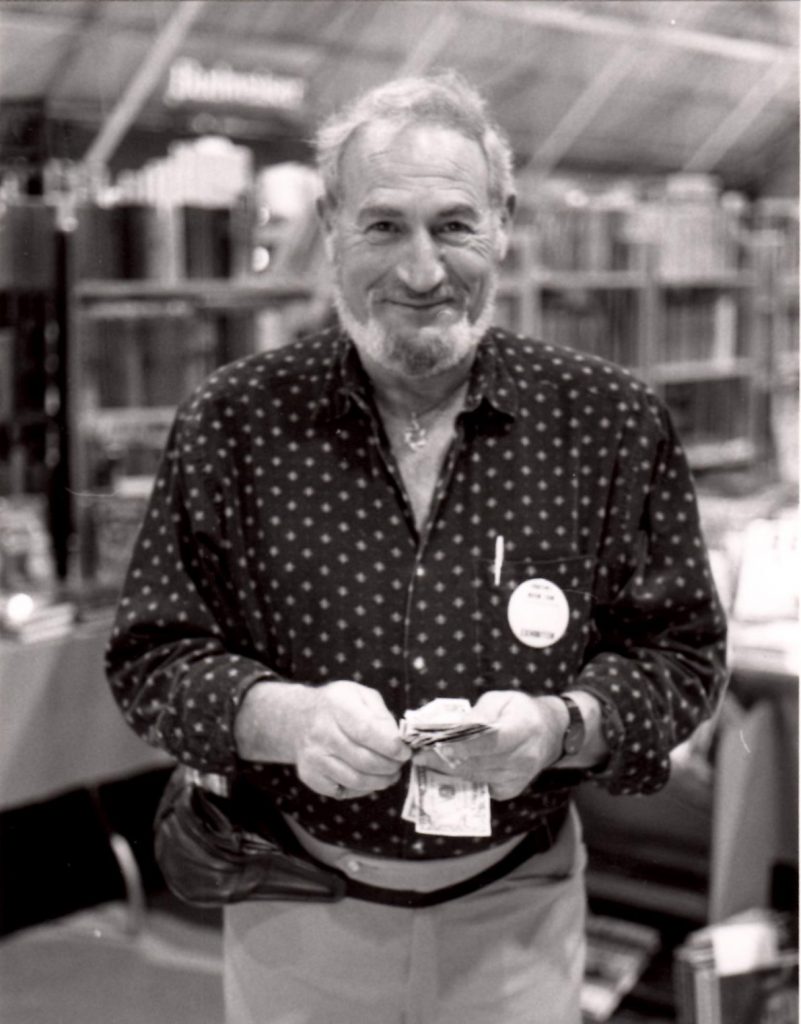 Sol was a partner in the California Book Fairs that I was involved in.  He had also operated a mail order business dealing in private eye novels called “Mainly Mysteries”.  In his personal life, he was heavily involved in the AA movement.  He wasn’t just a friend of Bill’s, he was Bill’s long-lost twin brother.  Sol was on my mind as I read Pulp, because he had just died the week before at the young age of 92.  I started laughing out loud just thinking about what a gigantic rant he would have gone on if he had read Pulp.  He was passionate beyond belief against drunkenness, and would wave his big cane around in a profane-laced rant at anyone perceived by him to be a drunk, even a fictional character. Sol was the main sponsor of AA meetings in Ventura, where he lived.

Even while drunk out of his mind, private dick Belane takes on an odd assortment of clients.  One hires him to find Celine, the long-dead French writer, who was seen frequenting a Hollywood bookstore.  Belane knows deep down that this is crazy, Celine had been dead for years, but off he goes to Red Koldowsky’s bookstore to check it out.

“You know Red.  He likes to run people out of his  bookstore.  A person can spend a thousand bucks in there, then maybe linger a minute or two and Red will say ‘Why don’t you get the hell out of here?’.  Red’s a good guy, he’s just freaky.  Anyway, he keeps forcing Celine out and Celine goes over to Musso’s and hangs around the bar looking sad.  A day or so later he’ll be back and it will happen all over again.”

Anyone not familiar with Old Hollywood might think that Red’s bookstore is just another fictional creation of Bukowski.  Red was, however, very real, and Bukowski knew him well.  His real name was Sholom “Red” Stodolsky and his bookstore was Baroque Book Store on Las Palmas Avenue, just a half block south of Hollywood Blvd. An article I wrote back in the 1970s and expanded and printed here on Bookstore Memories, called “Hollywood Blvd. Bookstore Follies” lists most of the bookstores in Hollywood at the time Bukowski was prowling around the area.  Here’s the listing: 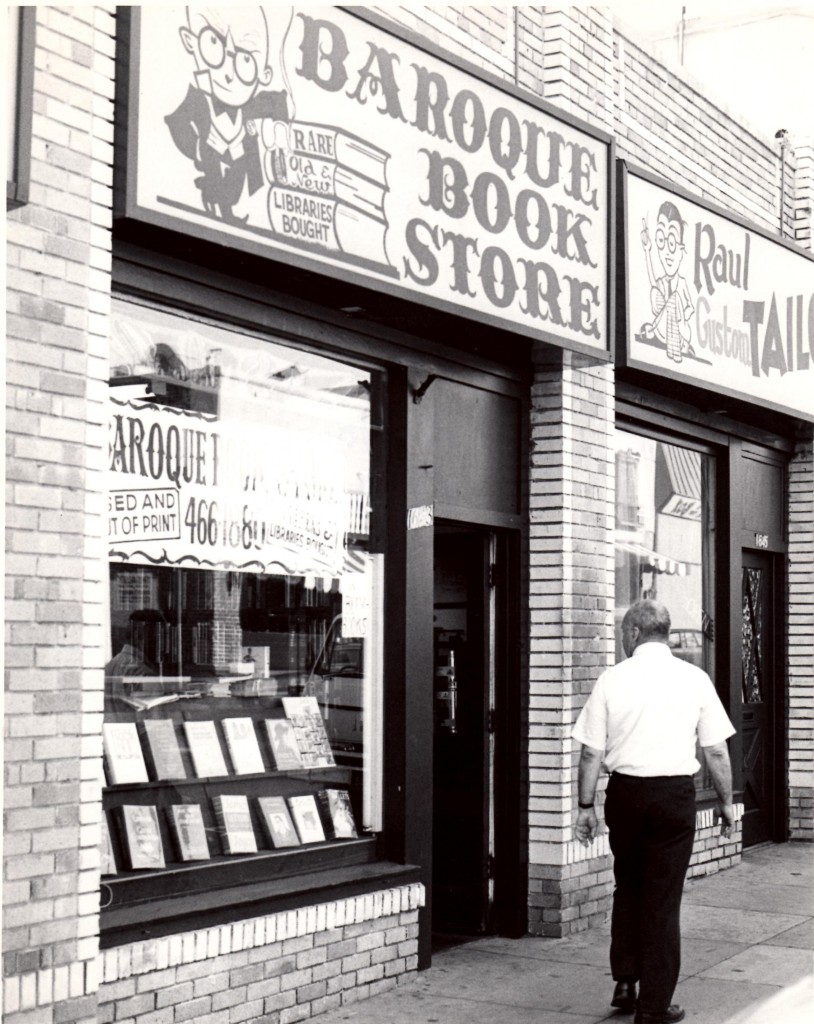 Lastly, we come to BAROQUE BOOK STORE, which almost adjoins Universal News.  Owner Sholom “Red” Stodolsky specializes in modern literature, literary criticism, music theater, film, poetry and first editions.  You can get an added thrill to that exciting out-of-print tome you find by reading it while strapped into the electric chair that sits in the middle of the store.  Don’t worry about the volts, it’s only a make-believe mock-up from a movie set. (Who said that book dealers are eccentric?)

As I remember Red in those days, he was about 5 ft. 10 in. had thinning red hair, a small red mustache, and a small belly paunch, the kind older men frequently acquire for free later in life.

Some of Red’s remarks from Pulp:

“Can you believe some of them come in here eating ice cream cones.?”

“Hey you” he yelled “get the hell out of here.”

“I can tell when they’re not going to buy.” 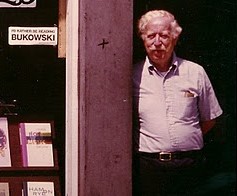 Was Red really that way, yelling at potential customers to “Get Out” or was this just a Bukowski exaggeration?.  By the late 1970s and into the 1980s Hollywood was declining.  This was mostly due to the greed of developers, banksters, and their handy tool, Mayor Bradley.  A Redevelopment area was created and plans laid for a billion dollar boondoggle of building, which is still going on to this day.  But in order to drive property values down to the low level that they could then be acquired by huge developers, services were cut, the police cut back, and the area of Hollywood got worse every year.  Bukowski called it “skid row Hollywood.”  By the 1990s the only three places that he thought were still viable were Red’s bookstore, Musso’s (Musso and Franks) and Fredericks of Hollywood.  The rest of Hollywood was repulsive even to Bukowski.

As the years wore on and crime increased, the booksellers had an increasingly hard time coping with an onslaught of thieves, the unwashed, the rude and the crude. Some of the book dealers could cope, others like Red were deeply offended at the incivility of it all.

Bukowski, writing Pulp, certainly was aware of this and described Red that way, maybe actually understating it.  L.A.Times writer John McCormick described being booted out of Baroque around the 1980s.

“Are you going to buy anything?”  asked Red 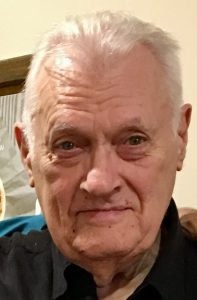 Now retired bookseller Fred Dorsett remembers Red as “curmudgeonly a human as I have ever met.  In fact, he is the benchmark against which all curmudgeons are measured.”

Fred tells of a book scout who occasionally would bring in some lit to sell to Red.  They had a cordial relationship, until a strange incident occurred.  The book scout picked up some signed sports books, totally out of Red’s area of expertise.  The scout sold them to Gene at Cherokee Books on Hollywood Blvd.  Somehow, during some gossip, Red heard about it, and the next time the poor Book Scout stopped into Baroque Book Store Red yelled at him, accusing him of the grandest and most foul type of betrayal, and told him to get out and never come back..  The book scout was still trying to figure that one out years later.

Trolling through the internet blogs relating to Bukowski and to Baroque sheds some more light.  A few remember Red fondly, and said they were always treated with respect, and that Red would  often give them something extra with a purchase.  Some other comments weren’t quite as kind:

“He was a type of eccentric character that seems to be dying off, along with the rest of his generation.”

Bukowski, however, got along just fine with the real Red.  He was impressed that Red was a huge fan, and had gone out of his way to stock a ton of both new and used Bukowski material.  In 1989 Bukowski wrote a poem about Red, and it was published in a limited edition of 50 copies

Good luck trying to find a copy to purchase, the last one I saw was around $1700.  If you are diligent, you can find the actual poem on the  internet, but you will have to look hard for it, maybe even hire Nicky Belane, Hollywood’s greatest private dick to give you a hand. Hey, don’t laugh, he found Celine, didn’t he?

Red Skodolsky died in 1998 at the age of  82.  The bookstore was closed and the stock liquidated.

Charles Bukowski died in 1994 not long after he finished Pulp.  The one case that he had taken early on in the book was to find “The Red Sparrow.”  Through thick and thin, he could never solve that until the end of the book.  It’s an interesting ending, which you will enjoy, especially when you figure out who or what the Red Sparrow is.

Time for a glass of wine. Cheers to the old Hollywood. 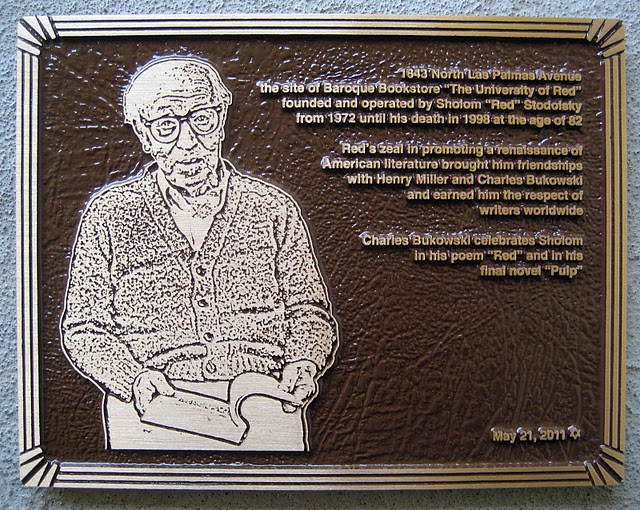 A plaque at the site of Red’s old bookstore on Las Palmas.