by Paul Hunt and Arnold Herr 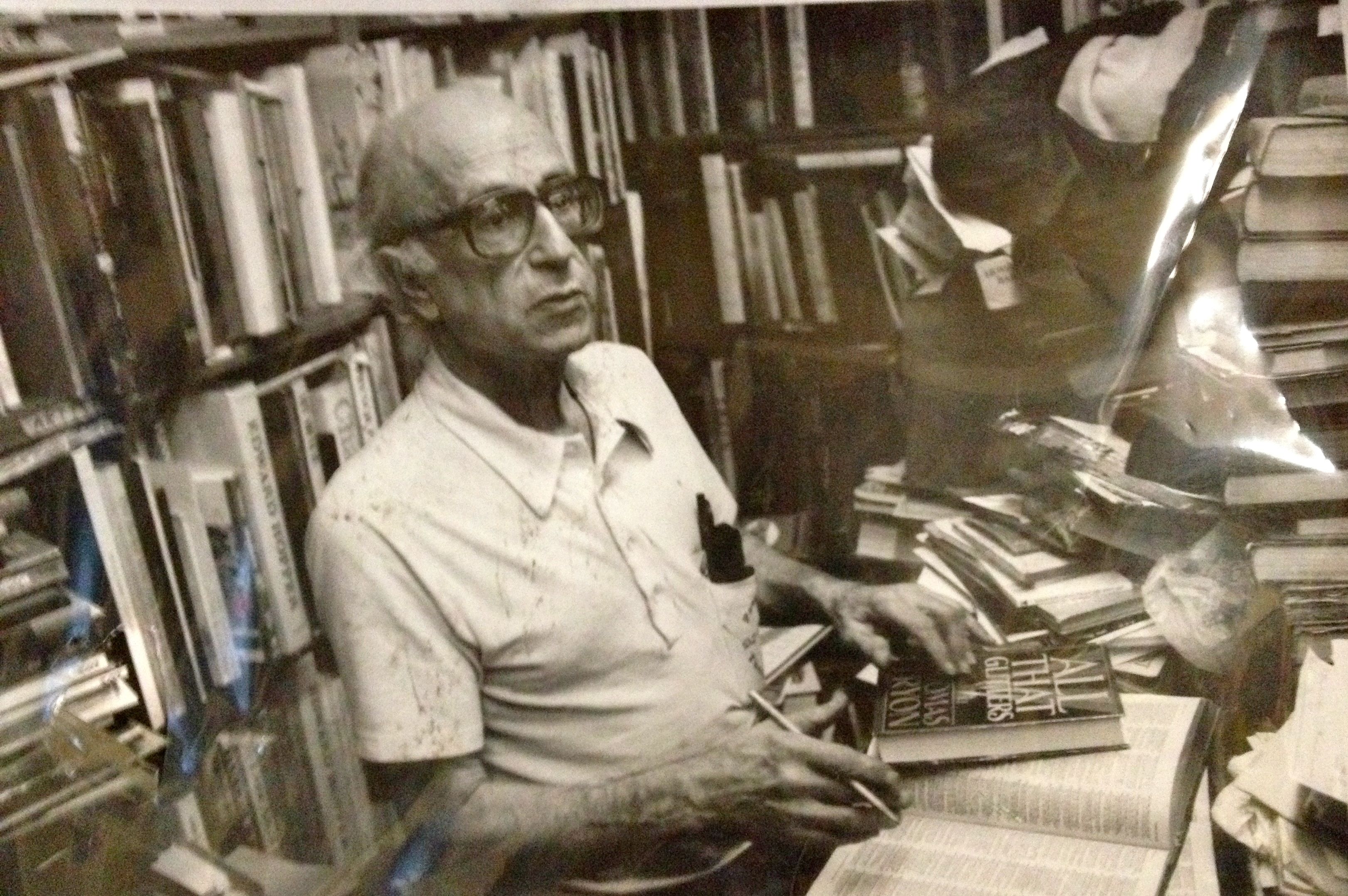 Eli Goodman, one of the long-time booksellers in Los Angeles died in a Burbank care facility this past Sunday February 7, 2016. He was 92 years old.  He opened his first book store on Western Avenue in East Hollywood in 1958. He and a partner took over the Western Avenue shop from Peggy Christian when she moved to La Cienega Avenue with other high-end booksellers like Heritage Book Shop and  Jake Zeitlin”s Big Red Barn. 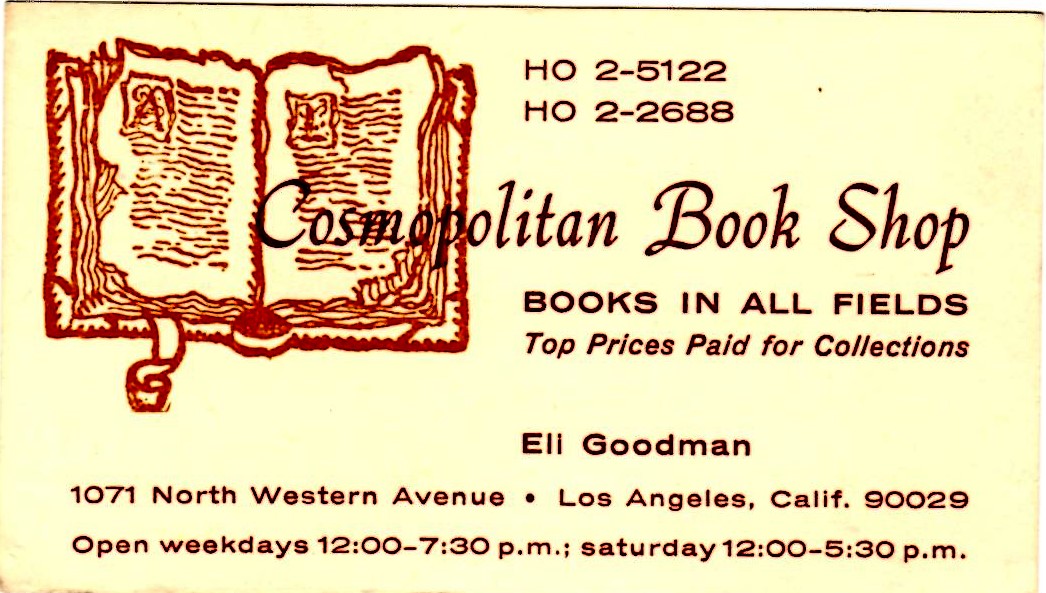 In 1971 Eli moved to 7007 Melrose Avenue near La Brea in the heart of Hollywood.  He established himself there in the heart of the chic collectible shops and fashion parlors. Later, in the 1980s skyrocketing rent forced him to move a couple doors west to 7017 Melrose Avenue, a double storefront.  This was to be his last location.  His shops were always stocked with a variety of books on all subjects in the modest price range, although he accumulated and sold higher-end scarce, collectible, and rare books when he could get them. For a while, his brother, noted Hollywood author Ezra Goodman worked in the store in the back room, pricing the rare and collectible books.  Ezra, a journalist for major newspapers and Time Magazine, covered the Hollywood scene.  His writings were on the flamboyant actors, the studio moguls, and the latest films.  He wrote a book that became quite famous called “The Fifty Year Decline and Fall of Hollywood.”  About 15 years after it was published he received a death threat, which he immediately assumed  was the result of a “contract” put out on him by either Howard Hughes or the Hollywood Moguls or maybe both.  He went into hiding, working for Eli in the back room of the Melrose shop, always in the disguise of a homeless man, and kept such a low profile that by the turn of the twenty-first century he had faded into total obscurity, the alleged “hit contract” having turned to dust, and Howard Hughes and the mob of Moguls long dead.

Eli took care of his brother until his death, providing him an apartment and supervising his medical care.  Ezra was a great writer and it is a shame that he went into hiding after publishing his fascinating book on Hollywood.  Ezra died about 10 years ago, although Eli kept the apartment just as it was for a couple more years, because his loss pained him so much. Closing down Ezra’s place represented the finality of Eli’s last remaining relative, the dreaded end that left Eli facing old age alone. 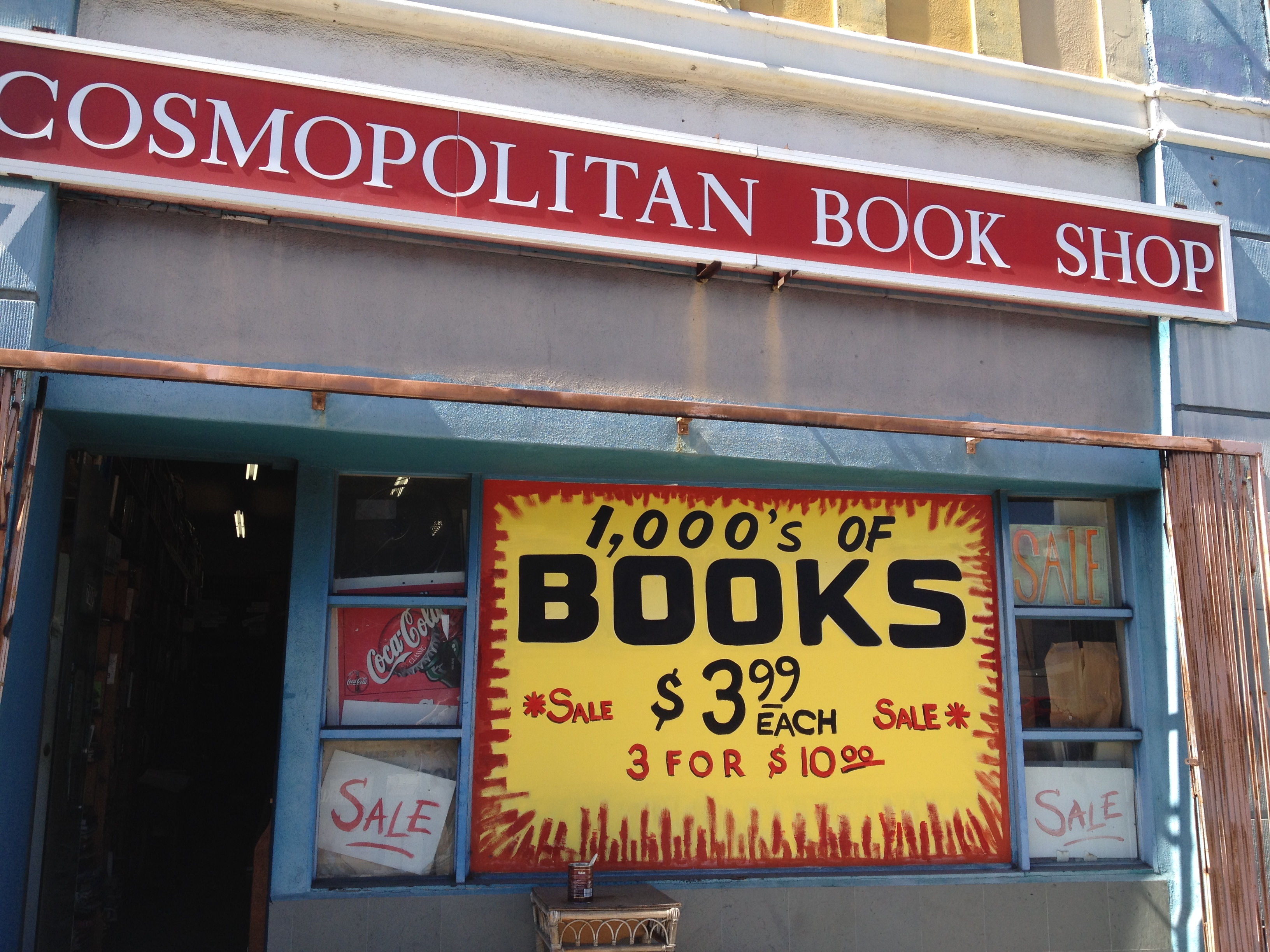 At Cosmopolitan, Eli himself had plenty of drama to deal with.  Anyone who has owned or worked in a bookstore will know that every day brings something new, both good and bad.  Once a fire smoldered overnight in the shop, this due to faulty wiring.  The smoke damage was bad enough, but the fire department poured on a billion gallons of water, sealing the fate of thousands of books.  Eli could not bear to discard them all, and spent months on various schemes to dry them out. Finally,  the thousands of books that were damaged by fire and water were then stored in large plastic trash bags for a number of years until it was determined there was no longer any reason to keep them since he had found out that his insurance agent had been pocketing the premiums, leaving Eli with no insurance.  In the interim, the books had mildewed and new and peculiar life forms thrived and bloomed in the warm, humid atmosphere in the bags.  Sometimes the gases in the bags would expand causing them to swell and burst.  Several customers and one or two staff members were overcome by the escaping pestilential effluvia.  In fact, one longtime staff member grew a third eye.  Or maybe it was a third ear. The whole smelly episode was a total loss, both financially and emotionally.

There were always crazy characters roaming through the store.  It seems like eccentrics and schizophrenics gyrate naturally to bookstores, and Cosmo pulled in its share.  Being one of the larger stores in Hollywood also meant that there were always books by the tonnage to purchase, and Eli was always up to the task.  He could never turn away some down on his luck book scout who showed up to sell Eli 20 boxes of books, paperbacks, and magazines with a lavash supply of rubbish mixed in.  As long as it was really cheap, it would end up stacked in teetering piles inside the front door.

Eli and his staff made a number of great buys from estates over the years.  Enough to carry the shop during times when the book inflow was slowed due to astrological or economic effects on the sellers.  Some book scouts couldn’t show up until their period of incarceration was over.  Other book dealers have also seen this strange phenomenon. The last few years were a struggle for Eli and a couple of dedicated employees.  The rent had gone way up due to the building being sold to a major corporation.  Meanwhile, the internet and amazon had taken away a chunk of the business.  Getting on the internet as a seller was a big help, as was using amazon.com to order books for customers, bringing in needed sales.  But Eli’s declining health when he was in his early 90s was the big factor leading to shutting down the store in December of 2014. All in all, he had had a good long run, more than most will ever get.

Those who knew Eli will remember him as a very intelligent man, self-educated by his beloved books.  His sense of humor and his extreme thriftiness carried him through the tough times that seems to dog booksellers.  It is not a profession for the weak.  His Cosmopolitan Book Shop was the last of the large used book shops in Hollywood.  Gone before him were all the scores of great book stores that at one time had lined Hollywood Blvd.  Old timers remember some of them: the huge Hollywood Book City, Universal Books, Gilbert’s Books, Larson’s Book Store, the fabulous Pickwick Bookshop, Atlantis Book Shop, Marlow’s Bookshop, Jack Garvin’s Hollywood Book Shop, Helen Hall’s Hollywood Book Service, Fred Dorsett Books, Hollywood Book and Poster, Collector’s Book Shop, Red’s Baroque Book Store, Aldine Books, Cherokee Book Shop,  Book Treasury, Partridge Books and others.  Hollywood Boulevard from Western Ave. to Highland Ave. was the dream street for book lovers in the 1960s.  Now the only shop left is Larry Edmunds who sells books on cinema.  In the place of all the fine book stores are nightclubs, bars and souvenir shops. As far as used book stores go, Eli’s death is the end of an era in Southern California. The few literary outposts left are scattered around the county, there is no more book row, and the way things look, there probably won’t ever be again. Eli Goodman loved books and no matter the hardships loved to work in his shop every day. Rest In Peace our beloved friend.

Goodman was interned on April 21, 2006 at the Riverside National Cemetery.  He qualified for resting there by his service in World War 2.