Trash-Training To Be An Effective Book Buyer.  Choosing an Appropriate Costume For Hoarder’s Castles and Landfill Estates. What the ABAA Won’t Tell You. 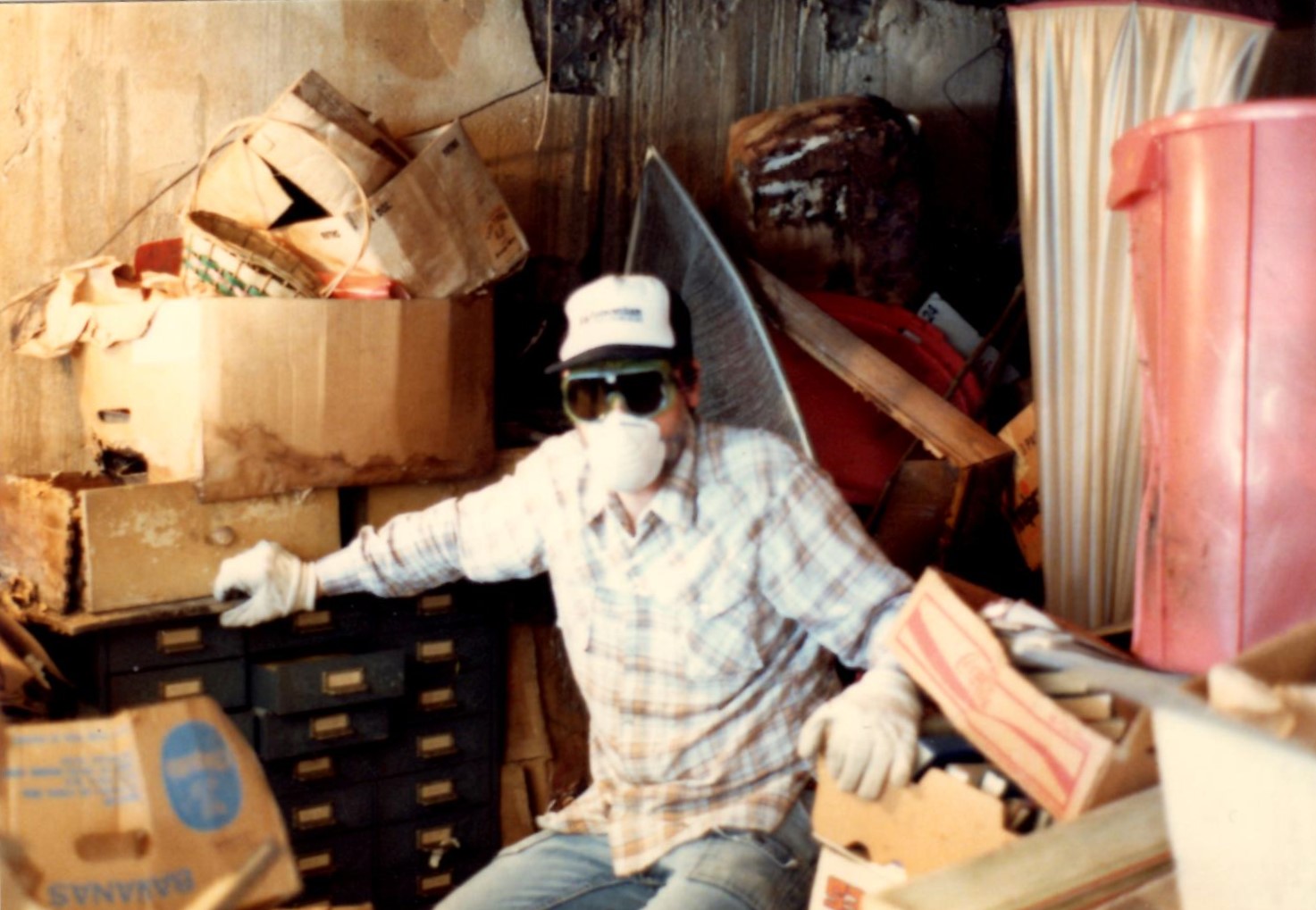 The Author in full book buying costume. A side benefit is that the seller can never positively identify you as the buyer in case of later trouble, like when they say the map to the treasure granddad buried during the Great Depression was hidden in a Reader’s Digest condensed novel.

It’s weird, and I know it goes against all medical advice, but hoarders who live with two feet of trash throughout their house usually live longer than people who live in a place where you can eat off the floor. I’ve been in houses that were so clean they look like a commercial for comet cleanser. The human occupants were dead in their 40s or 50s. On the other hand, old folks living in refuse are always in their 90s. Maybe it’s the chemicals in all the cleansers we use. Maybe I’ve just been a victim of extreme coincidence, who knows? My theory is that people living in rubbish piles have built up their immune systems to the point that almost nothing can kill them. Maybe the billions of parasitic, microscopic things living on and near them actually protect them from other dangerous-to-human bacteria. The answer to this, and many other medical questions are probably to be found in the basement of Harvard Medical School, where the millions of scientific papers from the last two hundred years are stored away from prying eyes. I don’t have the time to look through them, but maybe some AI robot could be put to work in the future.

Ah, the life of a bookseller. You just sit around and read books all day, right? Once in a while, someone calls and you trudge over to a neatly kept house and browse through some dust-free books and select some nice things to fill in your inventory. For me, the reality was quite different from the get-go. I began in the warehouse district of downtown Los Angeles, over 40 years ago. I started by prowling through the bins of trash, books, papers, and magazines found in the back rooms of charities. Gritty work. But good training because it was downhill from there. 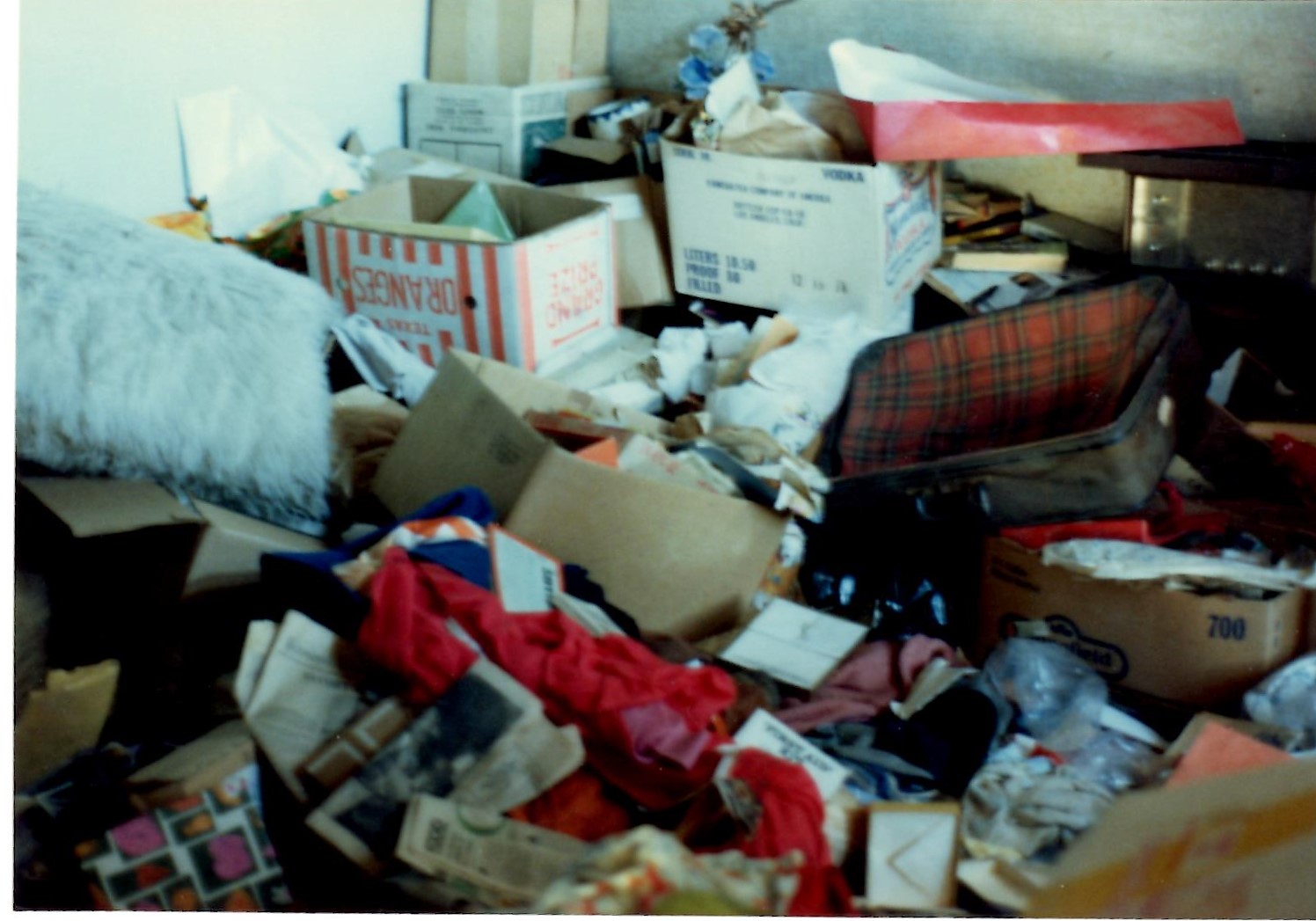 The Living Room Had Real Possibilities

It also seems that when you get the call to look through a hoarders hell house, it always happens when the temperature in L.A. Is around 100 degrees, with no breeze. Crawling through some old garage or attic, breathing the thick dust that is disturbed, looking for something decent that can be sold if it doesn’t get ruined by the gallons of sweat dripping off you.

It was just such a hot day in the San Fernando Valley when a call came in from my pal Keith Burns. “Hey, meet me tomorrow at (blank, blank address). Oh, and wear your combat gear, the place is a bit of a mess.” The next day I showed up in full gear, ready to root through the debris. Gloves, goggles, hat, boots, dust mask, flashlight. The old gal in her 90’s who opened the door to this hoarders hell did not say a thing about my costume. “Your friend is in the living room” she said cheerfully, looking down at my combat boots. 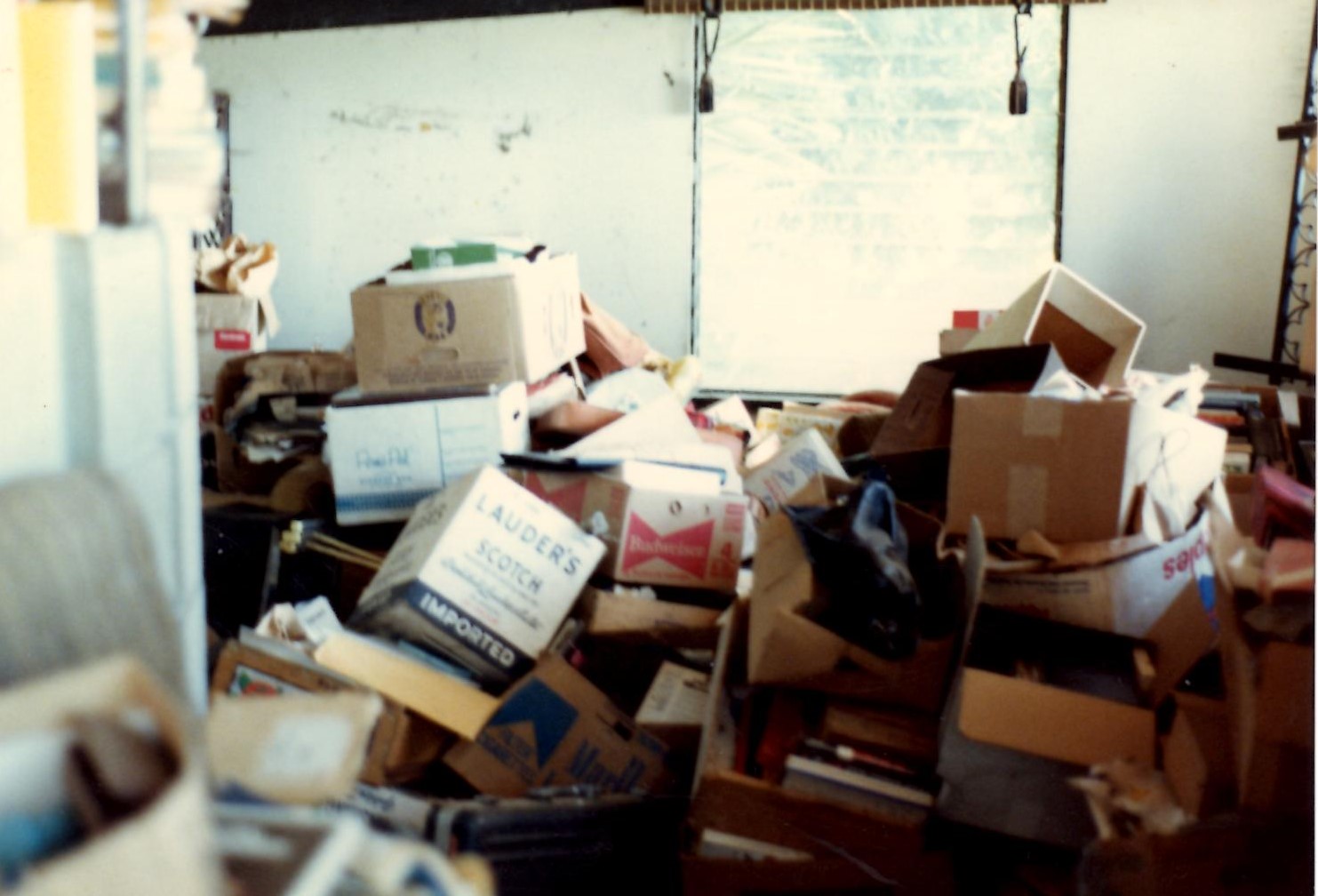 Another View of the “Living” Room

What a mess the place was. A charming stilt house perched on the side of a canyon hill, nothing could prepare me for the two to three feet of trash solid throughout. A rare case this was, as Keith researched the psychological impacts, as both husband and wife were hoarders. Usually, I was told, it was only one person. In this case both contributed to the décor. Both also lived to a ripe old age. I thought of all the hours they saved by never taking out the trash. Just pitch it on the floor, why bother to trudge to the garbage can? The time could be better spent reading a book or watching TV. Well, in this case, not TV, it took us a while to find it, buried under a landslide in the living room. 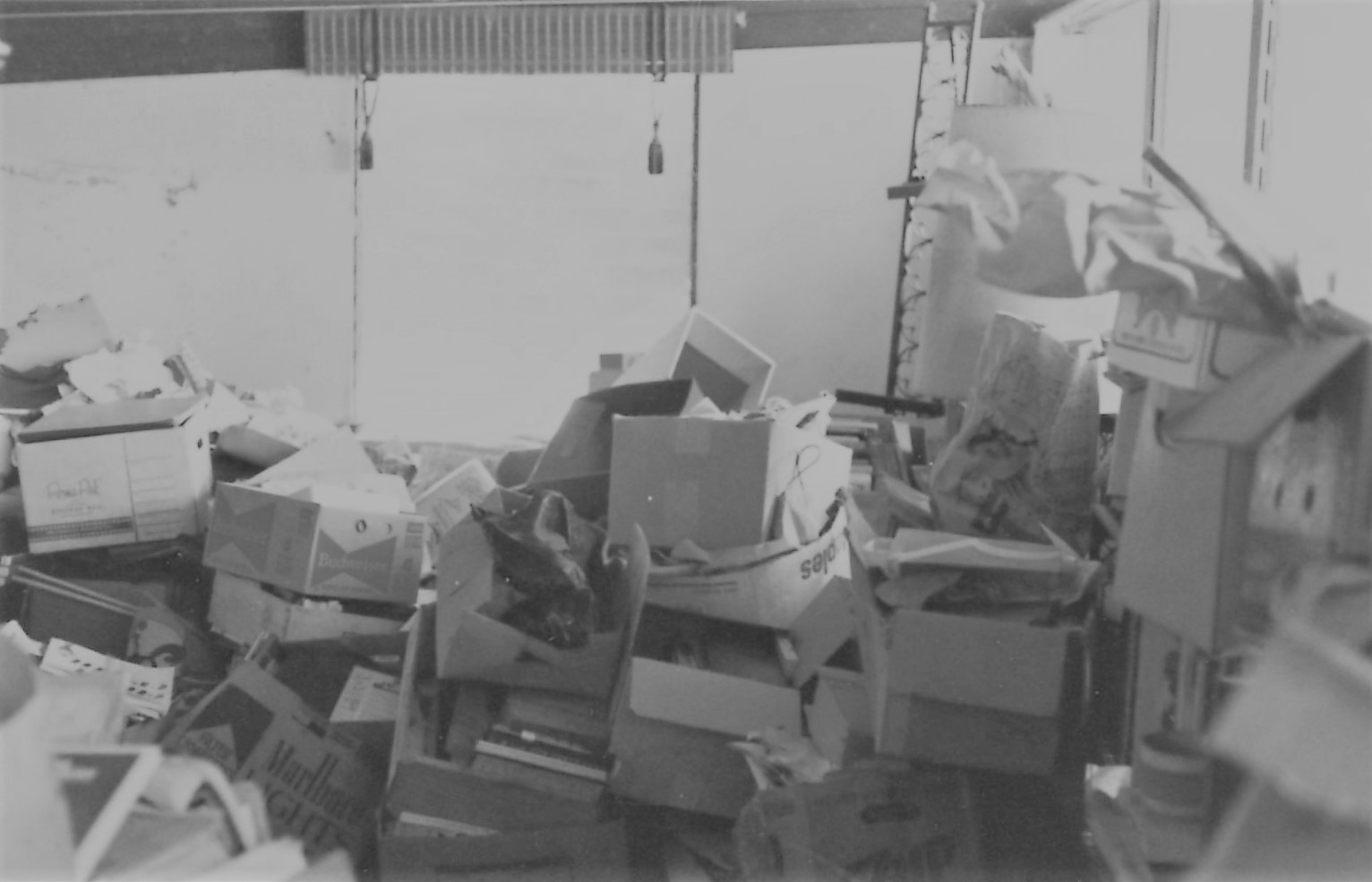 Before there can be bucks on the bookshelves, there’s books in the trash.

We started in the living room, digging down to the lower levels, finding quite a few books. The dead husband was a photographer, and ordered a lot of books on the subject, which we found wrapped and unopened as delivered by the mailman a decade previously.

We worked one day a week at the house, throughout the hot summer. It was so hot and dusty, one day a week was about all we could take. We made our way, room by room, digging and rooting through the debris. The lady of the house had been moved out into a long- term care facility, Keith would pick her up and let her roam around the house, looking for a few little tchotchkes to take back to her room at the old folks home. Keith and I avoided the kitchen, which was a breeding ground of biological materials. One day when I arrived I swear I saw a guy who looked like Saddam Hussein taking samples from the refrigerator. Maybe it was just the ghost of the husband, looking for a beer. 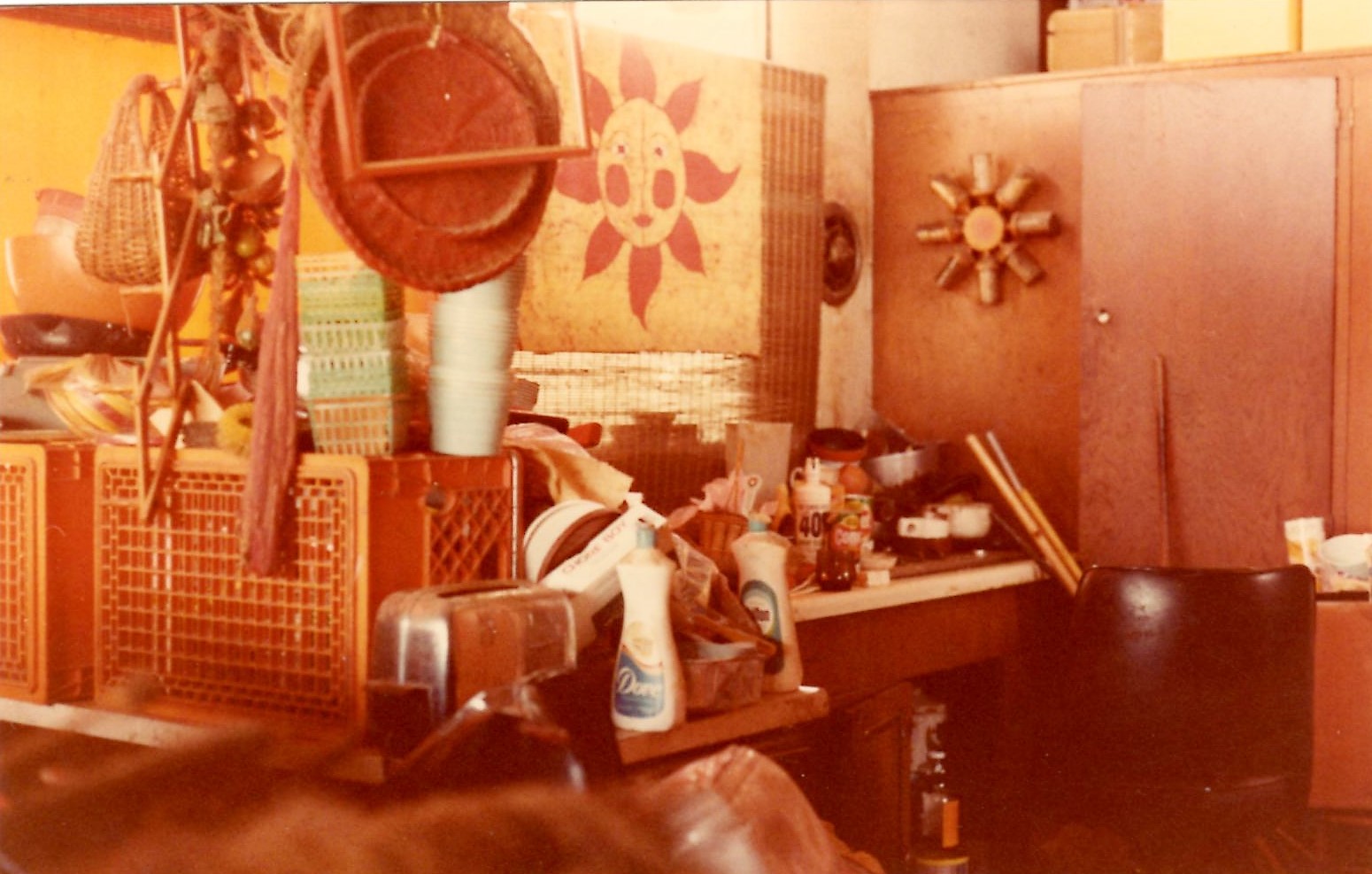 We had to shovel out enough debris from the bathroom and bring in some soap so it could be used. When we got to the bedroom, we had to step up about a foot above the two foot debris level, careful not to hit our heads on the ceiling. I spent one entire day with Keith digging out books from under the bed, which had been packed with old newspapers. There was no air conditioning. We opened the windows, and only more 100 degree heat came in. We sweat through our clothes. I was laying on the bed, hanging over the side, digging out stuff from under the bed when Keith reached over with a stick, pretending it was a rat running up my leg.  I screamed and levitated three feet in the air. I came down and landed hard on the filthy bedspread, sending up a monstrous dust cloud. He laughed about that for weeks.  One day, we went out and grabbed a few burgers for lunch. We accidentally left one in the bedroom on top of the dresser. The next week when we returned, it was gone. Only a few shreds of paper were left. Something else, something not human, was living in the bedroom, and it was hungry. 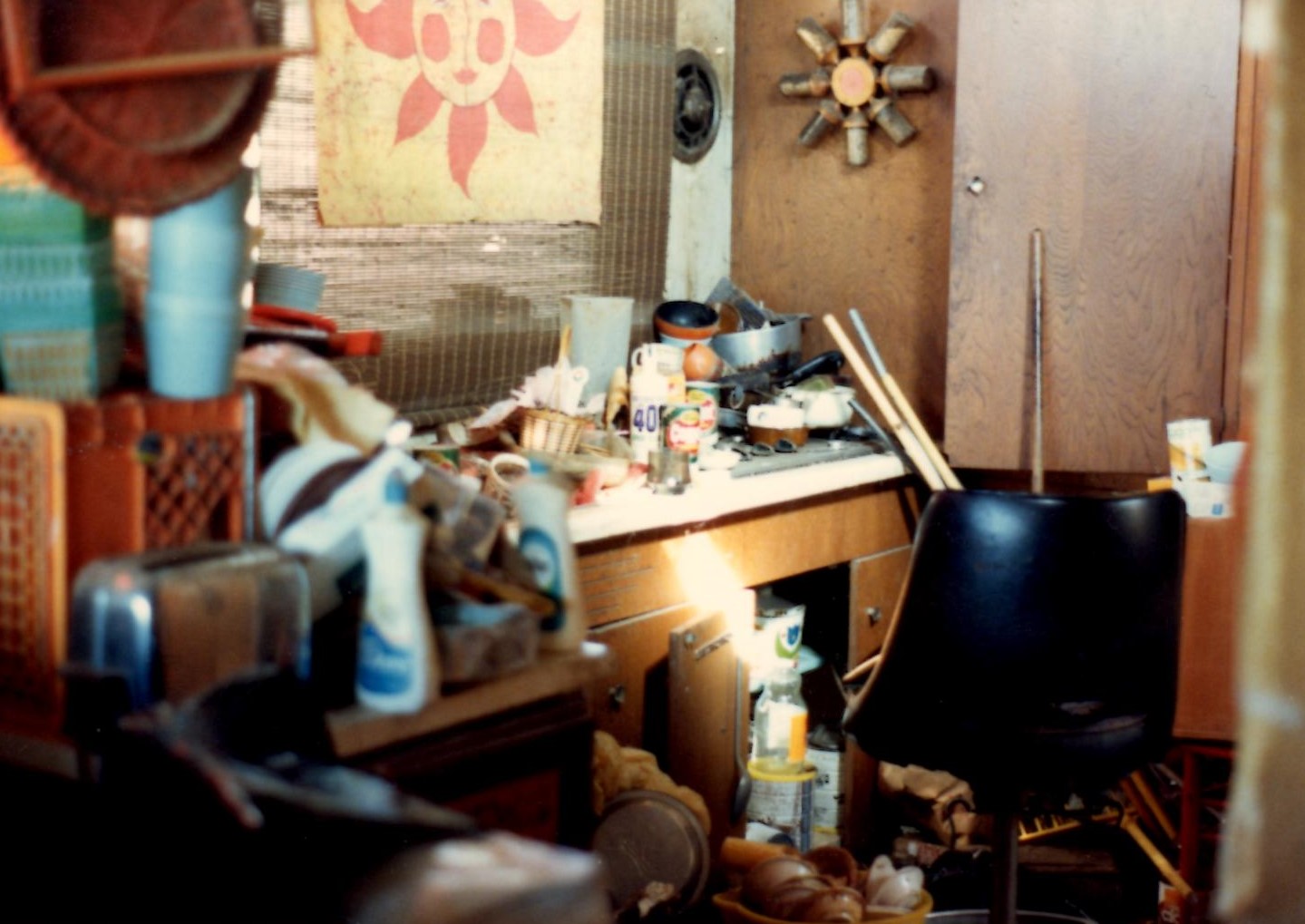 We eventually finished up the house as best we could, and spent the last few outings in the garage, just before the whole place was to be gutted out, I assume with steamshovels. 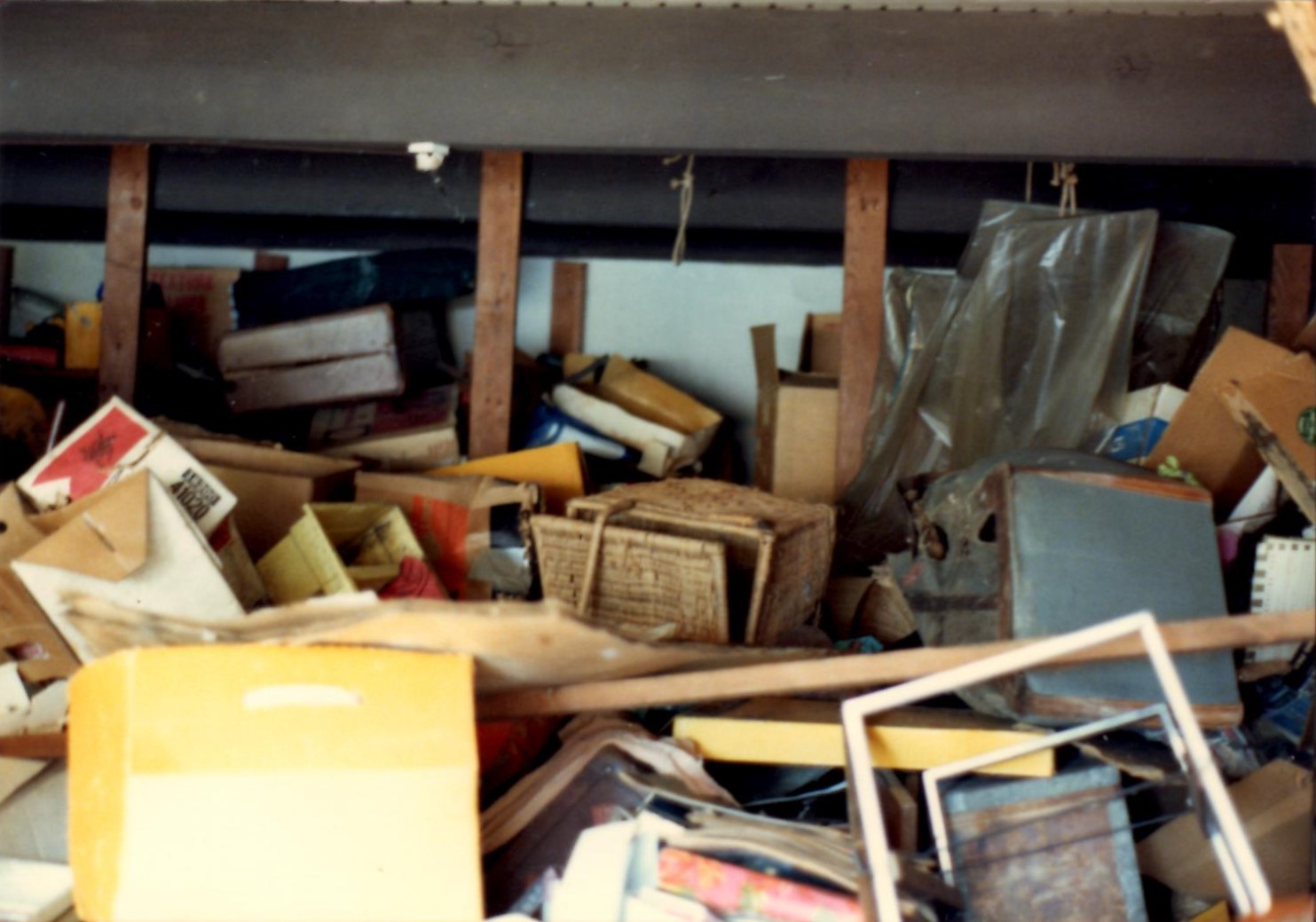 When we opened the garage door, the sunlight glistened off the hundreds of black widow webs, covering most of the airspace. Since I was the one with the boots on, I clambered over the 5 foot stack of crumbling boxes of stuff, rooting around, trying to find something of interest. I found a case of unopened coke cans.  Maybe we could put them in the fridge.  Alas, although they were unopened, they were empty. I have no idea what biological process was at work to perform that strange miracle. I eventually found some books and some wrapped up prints that I sailed across the garage like Frisbees through the spider webs to Keith who then brushed them off and loaded them into boxes. I made it out of the garage without a bite, but I had nightmares for a week of being attacked by huge black widow spiders. 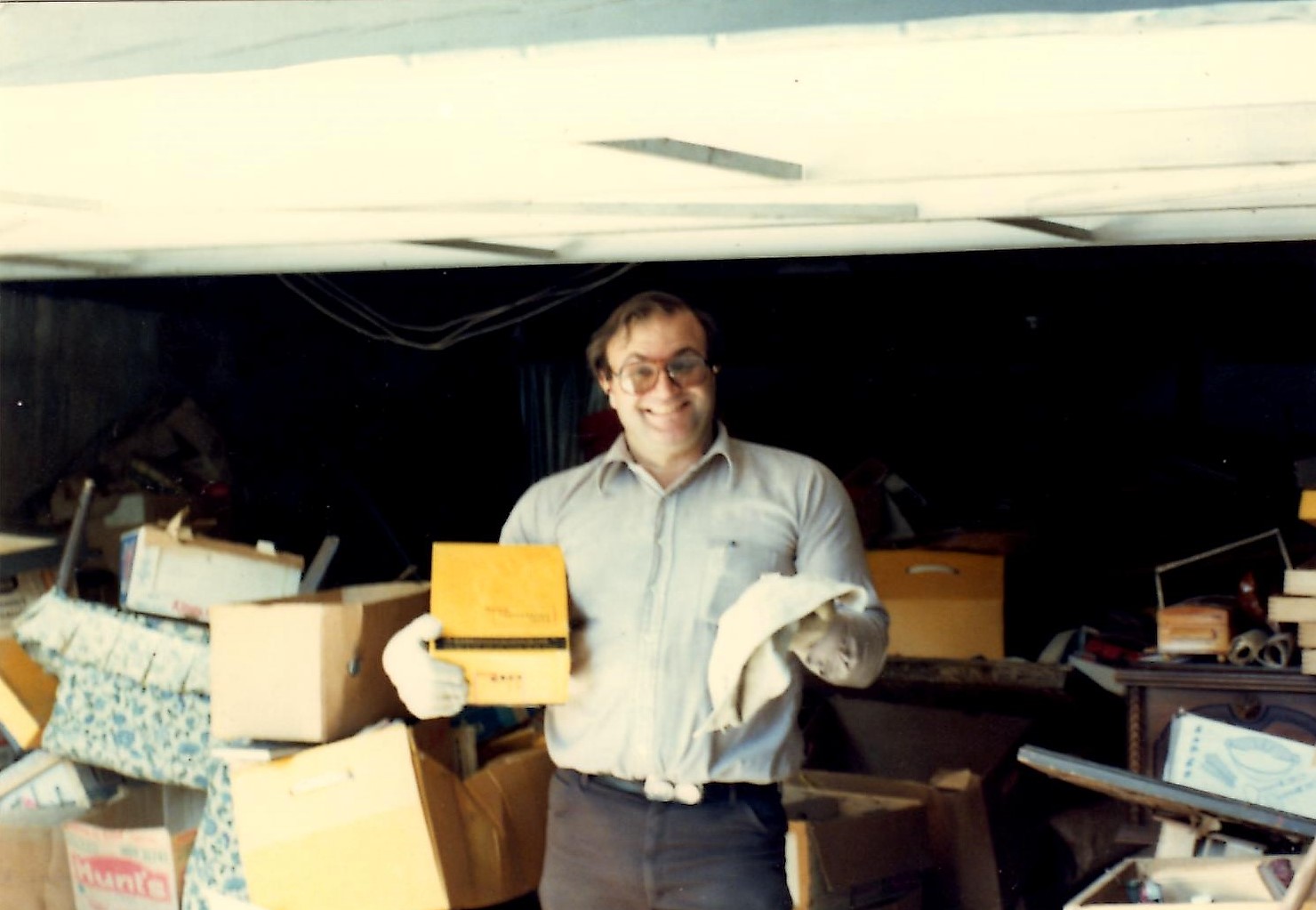 Keith with booty from the garage.

We did find some good books and prints in this epoch, enough to pay gas, lunch, and maybe laundry bills. This includes the food offerings to the mysterious creature in the bedroom. I’m writing about this “book call” to the hoarders lair only because I happened to bring my camera on a couple of the days and snapped some photos, to remind me of how hard it is to get books sometimes. It’s not for the squeamish. There were many other such adventures, the story usually better than the actual booty, but as the saying goes, “The journey is it’s own reward.” 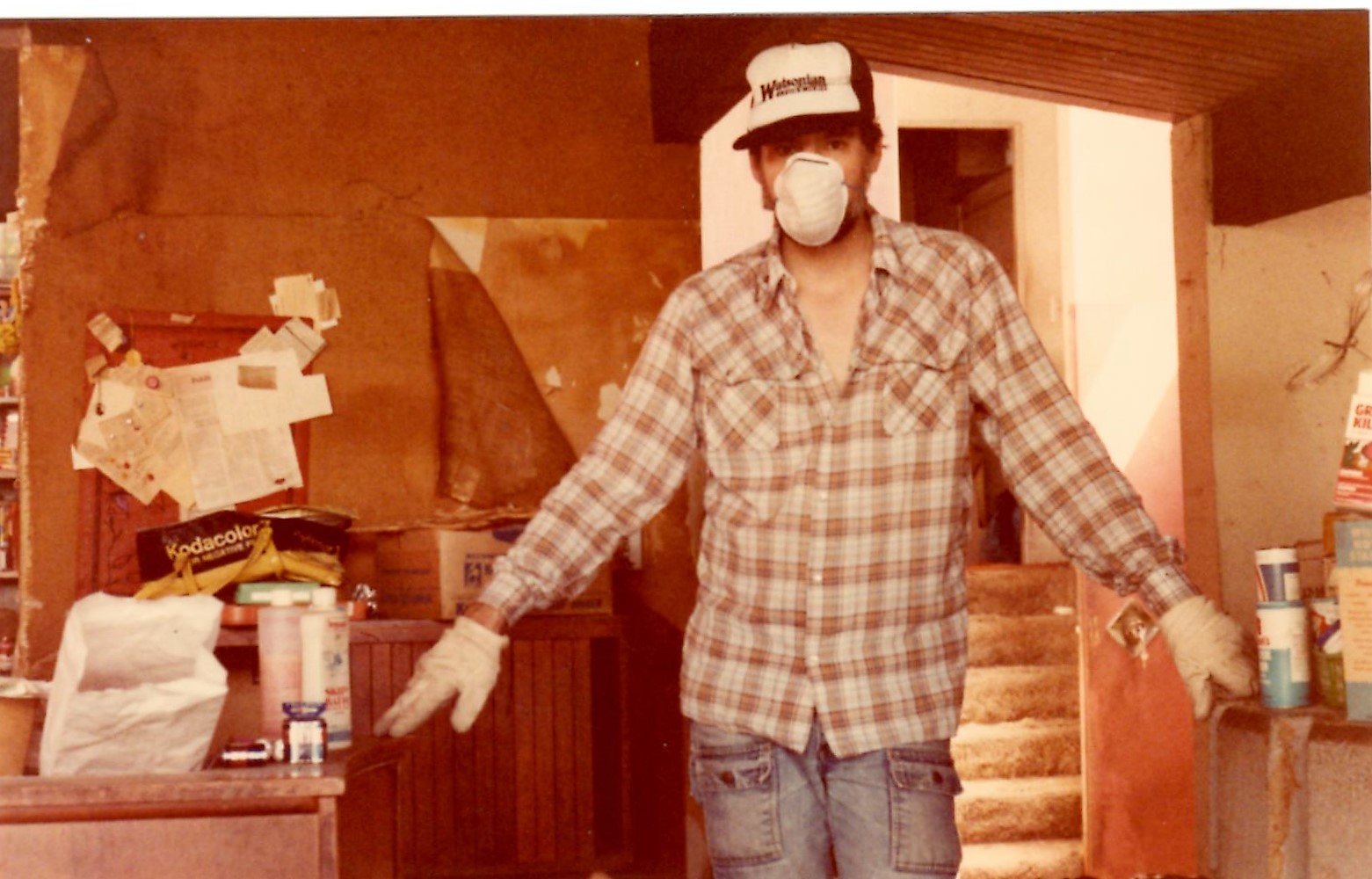 Always wear the proper costume for the event.  This should be required dress for all Booksellers. They should be given stripes or pins for each outing, like the Boy Scouts.  Eventually you would look like a South American Generalissimo.