Al-Mutanabbi Street Starts Here: Marking the Anniversary of a Disaster in Iraq
For my part, I think it’s important to try to remember all of it, to remember as much as we can reasonably hold in our hearts and minds.
by
Claudia Lefko 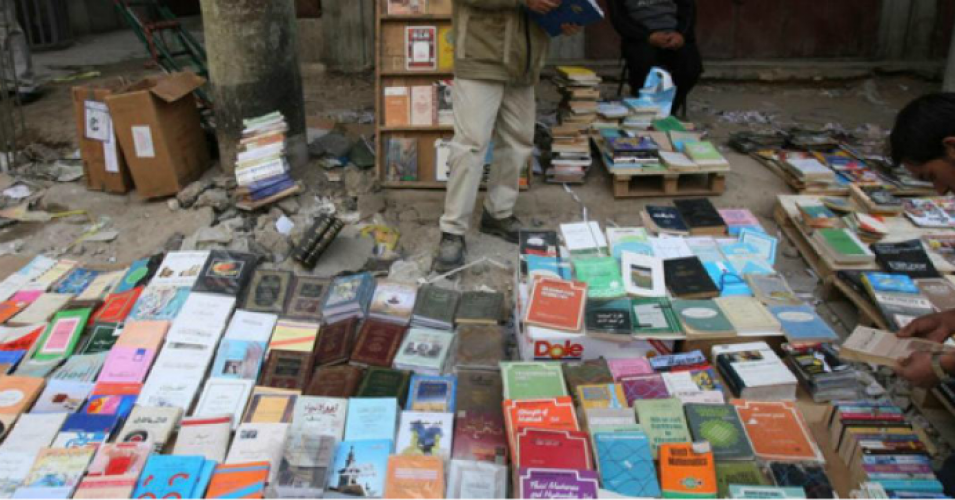 A car bomb exploded on Al-Mutanabbi Street in Baghdad on March 5, 2007. Thirty people were killed and an estimated one hundred others were wounded. Car bombings were common in Iraq in those terrible an terrifying years. So many bombings over so many years, they barely made the news here in the US.

But the bombing on Al-Mutanabbi Street got the public’s attention. The street is a cultural, literary and intellectual hub famous for its print shops, book stores, book stalls and cafes. The bomb destroyed the famous Al-Shabandar Cafe, killing four sons and a grandson of the owner, Mohammed Al-Khashali, the cafe’s owner, the great-great-great-grandson of the original 1917 owner. The dead and injured might respectfully be considered as collateral damage here, because the target—what was targeted for destruction—was ideas, culture, words and books, freedom of expression. This struck a nerve. People, maybe especially activists, artists, poets and writers, took notice, San Francisco poet and bookseller Beau Beausoleil responded by organizing Al-Mutanabbi Street Starts Here, an ongoing project calling on writers and artists around the country and the world to respond on the anniversary of the bombing each year. This year, the eleventh year of the project, there will be some thirty readings and exhibits in cities around the country and around the world: in New York and San Francisco, in Baghdad, Paris, London and Dublin; in New Delhi, India and Craigieburn, a suburb of Melbourne, Australia to name a few.

“Why remember? Why commemorate this particular event when there has been so much mayhem, death and destruction in Iraq over the last three decades.”

I’ve heard people wonder about this project. Why remember? Why commemorate this particular event when there has been so much mayhem, death and destruction in Iraq over the last three decades. After affirming the value of life , the significance of so many lives lost and altered, someone in the audience will inevitably and rightfully suggest that an act of destruction targeting a community or a country’s history, culture and ideas is more worrisome. Such an act, poses an existential threat. Yes, fair enough.

For my part, I think it’s important to try to remember all of it, to remember as much as we can reasonably hold in our hearts and minds. Understanding what has happened to Iraq and Iraqis over the last thirty years helps to understand Iraq as it is today, and Iraqis. It’s easy to forget, and many people have forgotten, their minds and hearts filled with concerns about other—new and ongoing—wars.

George Bush the senior launched the First Gulf War on January 19, 1991; four days later the US and allied forces announced they had flown more than 12,000 bombing missions. That massive bombing campaign essentially destroyed the country. In his report some weeks after the war “ended” UN Under-Secretary-General Martti Ahtisaari wrote: “Nothing that we had seen or read had quite prepared us for the particular form of devastation which had befallen the country… Iraq has, for some time to come, been relegated to a pre-industrial age, but with all the disabilities of post-industrial dependency on an intensives use of energy and technology.”

On February 13, 1991—on the 28th consecutive day of intense bombing in Baghdad —a “bunker-busting smart bomb” crashed through the roof of the Al-Amariyah bomb shelter killing an estimated 400 women, girls and young boys. Men and older boys—fathers, grandfathers, brothers and sons—had left for the night, leaving their wives, mothers, sisters, sons and grandsons in imagined safety.

The second Gulf War and the invasion of Iraq began on March 20 , 2003 with the now infamous Shock and Awe campaign. Whatever was left of infrastructure, electric grids and water systems was further damaged or destroyed in this second assault on the country.

My own short list barely scratches the surface of infamous events and dates, but it gives you an idea. Still, despite decades of tragedies, miraculously but of necessity, life goes on. Al-Khashali rebuilt the Shabandar Cafe and reopened it for business in 2008. He told reporters, he didn’t want to “…dwell on the past.”

“Life is returning in Baghdad, but it is not the same life. It is changed beyond belief and beyond recognition…”

It’s difficult to imagine the strength needed to undertake rebuilding given the enormity of his losses that day. But time, as everyone knows doesn’t stop for these tragedies; it moves on. Evidence of death and destruction is cleaned up. Rubble is removed, people’s bodies are buried and put to rest. Buildings are rebuilt. Order is restored.

Life is returning in Baghdad, but it is not the same life. It is changed beyond belief and beyond recognition, not for young people, but for Iraqis who came of age before the 1991 war, who survive and continue to live and work in the country—by choice or by default. Education in Iraq was mandatory for both girls and boys, and free through university. Now, this country, once recognized for having one of the highest literacy rates in the world is facing significant illiteracy, especially for women and girls. A country that once had free health care and a top-notch system of hospitals and clinics, with excellent medical schools, is struggling with crumbling hospitals and outdated equipment, struggling to train doctors and nurses and to keep them working in a still- dysfunctional Iraqi medical system; struggling to meet the basic medical needs of its people. Suffering goes on and on and on, for the most-part out of sight and out of mind of the international community.

Think about Iraq and Iraqis on March 5, remember Al-Mutanabbi Street. Think again on March 20. Try to remember what has happened to Iraq and Iraqis, to Syria and Syrians—to the world—as a result of that invasion. Make a vow to work to put an end to war, an end to war-making technology and research, an end to the preparation, governmental consent and execution of war—demand an end to all wars around the globe.