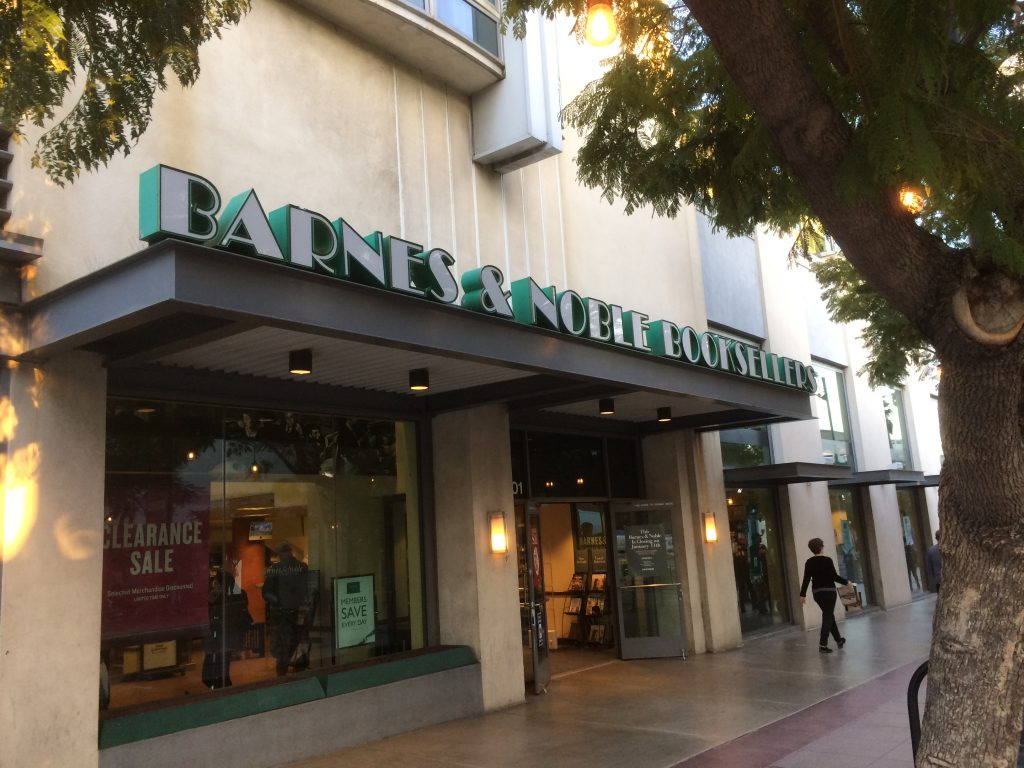 Today was the sad ending for the beautiful Barnes and Noble book store in Santa Monica.  At the end of a 20 year lease, they faced a large rent increase that made the profitability of the store impossible,  Everyone has heard of the expression “Greedy Landlords”.  In many areas, the wonder is that there is any room left for ever more rent increases before the commercial and retail locations just shut down.  The rent-increase euphoria that has seized the corporate real estate world is mind-boggling.  They must be led by younger folks, with no past memory.

There are many factors driving this insanity.  Remember the old Midnight Special book store on the Prominade?  The store was a leftist carnival, a literary beacon for the Progressives.  The building was owned by an old guy who was, let’s say, beyond “progressive”.  He kept the rent down and let the store flourish.  I don’t remember any store quite like it, and if you dug politics you were in socialist paradise.  Then the old ownier died or went into a long-term care facility.  The owner’s “kids” (not so young as the owner was in his 90s as I remember), got an offer they couldn’t refuse.  A major clothing company offered to pay around $45,000 per month rent.  The Midnight Special was paying about $5,000 at the time, so  guess what happened?  The “kids” got a windfall.  The progressives got the capitalist boot.  The kicker is that the clothing company, Levis, did not look at it as a retail store.  They considered it as a “billboard”, a place to showcase their jeans.  Compared to a two-minute television commercial in the Los Angeles market, the retail space is cheap, even at the outrageious price they are paying. So how can any bookstore compete with that?

Here is a blast from the past, an old timer shouting out to the current real estate corporations.  I am probably not the only one who remembers the Third Street Prominade in the 1980s.  Most of the stores were empty or filled with third rate shops, none special or exciting.  The Prominade was dead.  It was packed with homeless people.  It was a little scary, with a lot of crime. Think it can’t happen again?

The bad times are forgotten by the next generation, especially if they didn’t have to live through them as adults.  Back in the 1960’s there was a terrible recession in California.  I had a sales job that took me around the State.  L.A. was “economic bad,” but when I got into San Jose, I was floored.  Miles of businesses were gone, hundreds of them empty, closed down.  Supermarkets gone, huge shopping malls gone, car dealers gone.  Miles of recession devestation, an economic disaster. Driving down the main drag was like driving into the end of a Zombie movie.   So be advised, it can and might happen here. 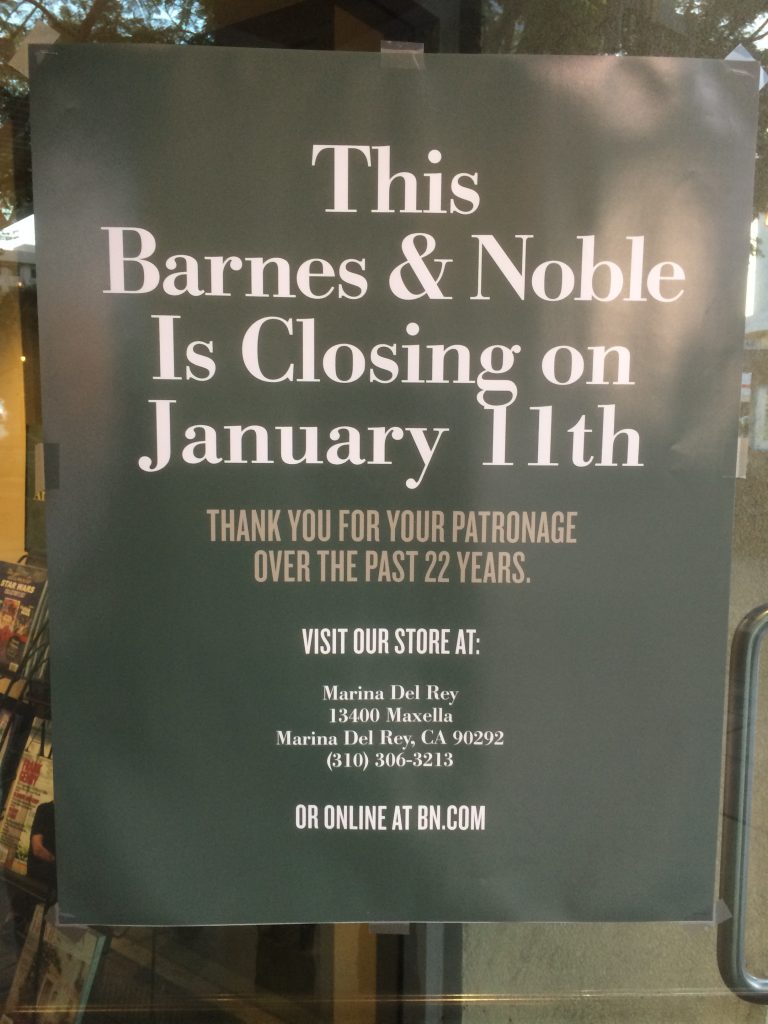 The Barnes and Noble store in Santa Monica was a beautiful bookstore.  It had three levels, elevators, escalators, great lighting, and a stunning design.  The event room on the second level was the best I have seen in a book store, a mini-auditorium where many great authors came to discuss their works and sign books.  We filmed there on occassion.

In other articles on BookStoreMemories, we have covered some of the issues that have impacted B & N:  the online monopoly amazon.com being the main culprit, the destroyer of bookstores.  But  B & N has itself made many past mistakes that go into the mix. We are nevertheless sad to see Barnes and Noble close their Santa Monica store, it was a wonderful store and a great place to shop.   There is now a literary hole in the soul of Santa Monica. 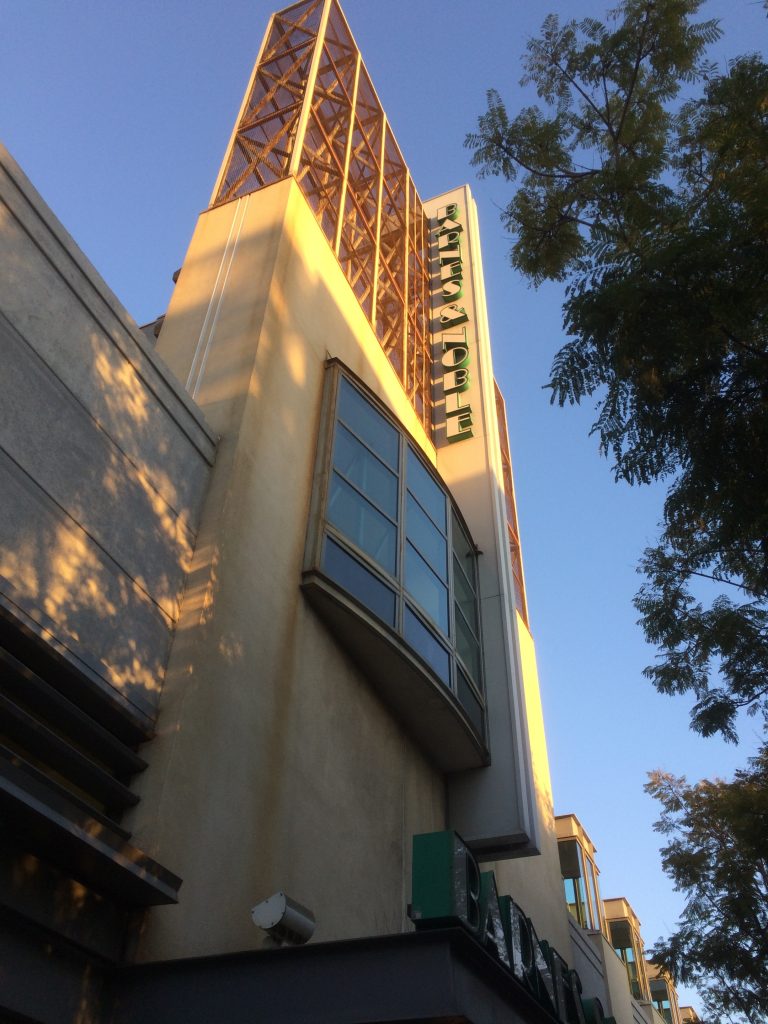 Video Tour of Barnes & Noble Booksellers on the last day, Click Below: