This is from an unpublished article that I wrote around 1976.  I had submitted it for publication to a newspaper called The Los Angeles Sun, but I don’t remember that it ever got into print before the Sun disappeared into eternal tabloid darkness.  This is how it was on Hollywood Boulevard in those glorious days of old when bookstores lined the street from Highland to Vine and beyond, with a few notations from my notes and memory that I have added to the original manuscript.  The weird thing about this is that I had it in notebook binders (my only copy), along with a slew of photos, and it was lost when I had to close my own shop.  The notebooks were in a storage unit full of books, which I lost due to my dire financial situation. Years went by, and then a dear friend from Sacramento, Keith Burns, stumbled onto the notebooks at a flea market in Alameda. The odds of that happening are astronomical, and I gratefully accept it from a kind Universe.  It’s like finding your Hopalong Cassidy wallet that you lost when you were seven.  Anyway,  he purchased them and recently dropped them off to me, hence I am able to share this story and the photos. The bad news, as fate would have it, is that I am in the middle of a forced move from my small apartment, due to the building being sold.  I am putting everything in storage once again, and may have to finish this while a vagabond from a Starbucks somewhere.  I will type tonight until my Internet is shut down, and continue it later from a coffee house. 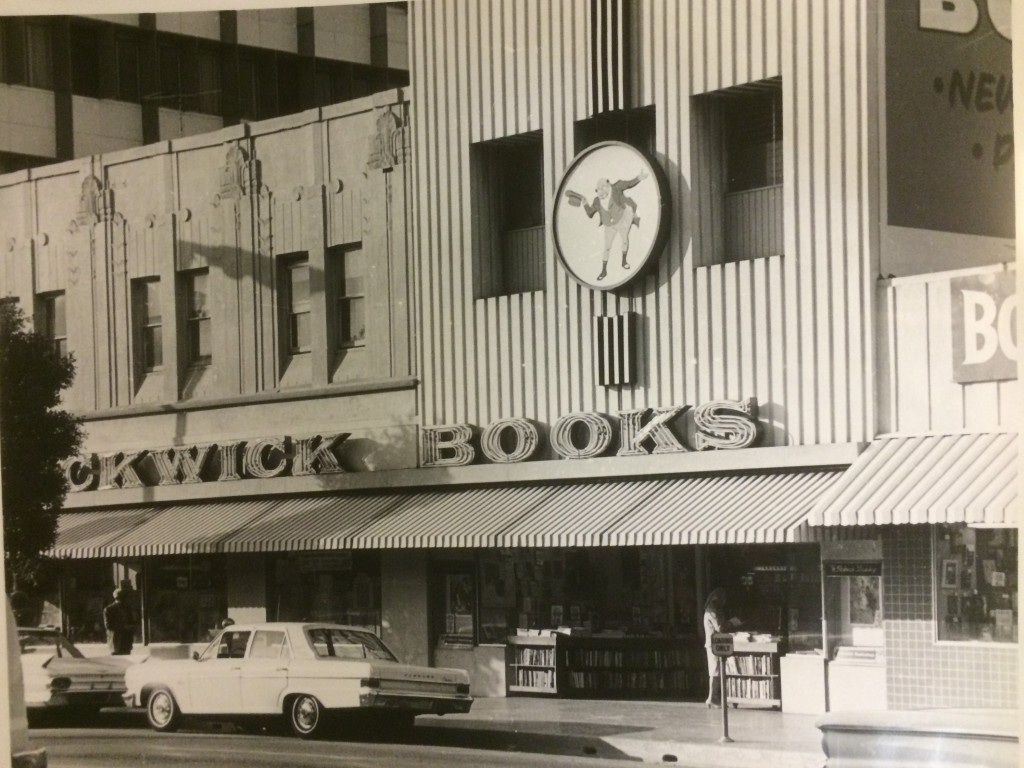 Hollywood may not be the movie capital of the world anymore, but it is rapidly becoming one of the finest book cities to be found anywhere.  It wasn’t always so, of course.  Early historical records show that our modern prowess in the book biz started somewhat feebly in a small location at 95 Main Street in downtown Los Angeles about 1862.  The honor of being the first bookseller in L.A. goes to one Samuel Hellman, who, according to the first city directory, also sold stationery, cigars, hardware, paints and glass.  “New music and books,” boasted an advertisement in the directory, “are received in by every steamer,” and no doubt shipped from San Pedro by the stage coach or mule freight!

We wouldn’t know much of anything about the early Los Angeles booksellers if the late Ernest Dawson, founder of Dawson’s Book Shop, hadn’t written a short article about the subject for the 1947 issue of the Southern California Historical Society magazine, The Quarterly.  It seems to be one of those subjects that people just take for granted, the bookstores come and go, change hands, take in partners, but hardly anyone bothers to record these doings, with the result that we are left with a very sparse history.

To book lovers and collectors, this situation definitely has its bad points.  For instance, Mr. Dawson described very briefly, a couple of the early second hand bookshops, like Jones Bookstore at 226 West First Street.  You can’t help drooling when you read that “one of the entrances was given over to cheap books, 2 1/2 cents, 5 cents, 10 cents, and 25 cent shelves and sections which always made for attractive browsing.”  When was the last time you bought a good used tome for 2 1/2 cents?

And then there was The Eclectic Book Store Second and Main, which was operated by James Wallen Smith.  According to Dawson, in 1892 you could trudge into his shop and find thousands of paper covered novels as well as scarce and valuable books.  Imagine the goodies to be found in the basement and the attic where Smith kept the pickings of his used books.  Access to both basement and attic was by a creaky ladder, which makes it all the more enticing to a fanatic bookhound, who would journey to the planet Pluto if he thought there was some good stuff there! 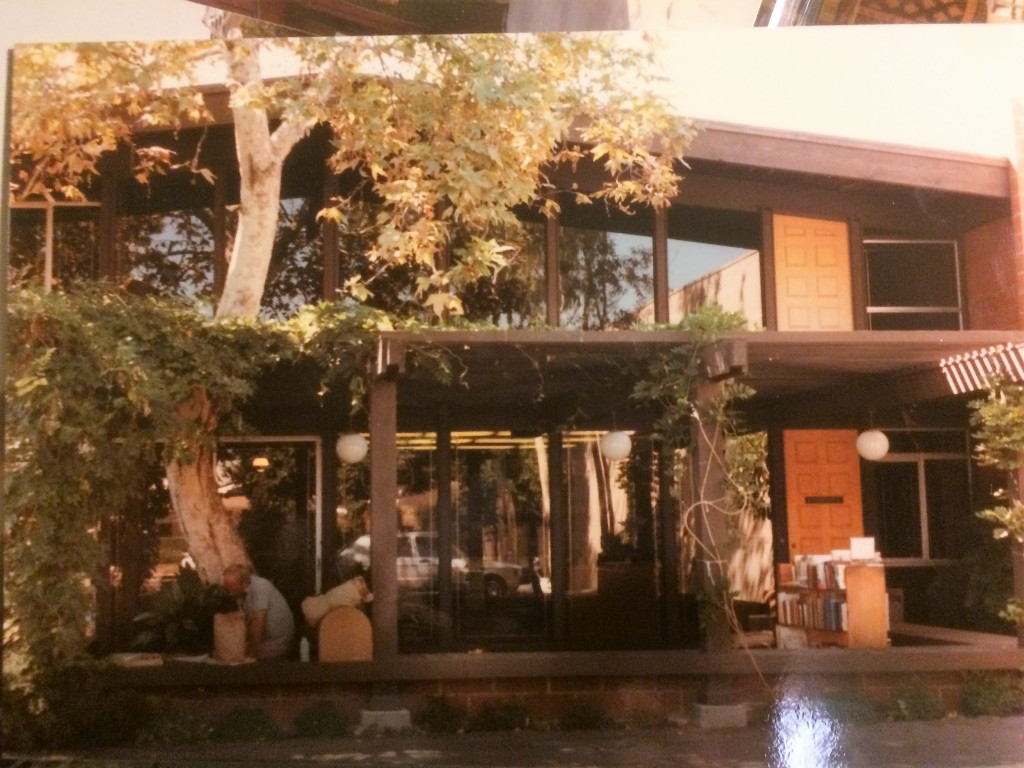 Dawson’s Larchmont store. Note homeless man getting ready to bed down for the night.

But all the old out-of-print book shops at the turn of the century era are long gone from downtown L.A. Their stock in some cases has been absorbed by other stores, and in other instances the stores have simply moved or gone out of business  Dawson’s founded in 1905 at 713 S. Broadway, is still run by the son of the founder, but has been located on Larchmount in Hollywood for some time.  As the downtown area slowly became blighted, the book trade moved west, following the business and the customers  The center is now, and has been for some years, located on Hollywood Boulevard.  That is not to say that there are not other bookstores of equal interest in other parts of the city; Hollywood Boulevard simply has the bulk of the stores, so in numbers, at least, it rules the book roost.  My recent survey turned up eighteen book and magazine shops located on and near the Boulevard, quite impressive for a strip of land only about a mile long.

These stores appeal to virtually every interest, from the bizarre occult to the everyday cookbook; from the no-longer-so-cheap paperback to the rare tome worth untold thousands.  But no matter what the variety or the appeal, they all have a few things in common.  For instance, most of the bookstores are over-crowded to the point of resembling a fleet of World War II Japanese prison ships.  This isn’t necessarily bad, as the true bibliophile loves to wallow through musty stacks. 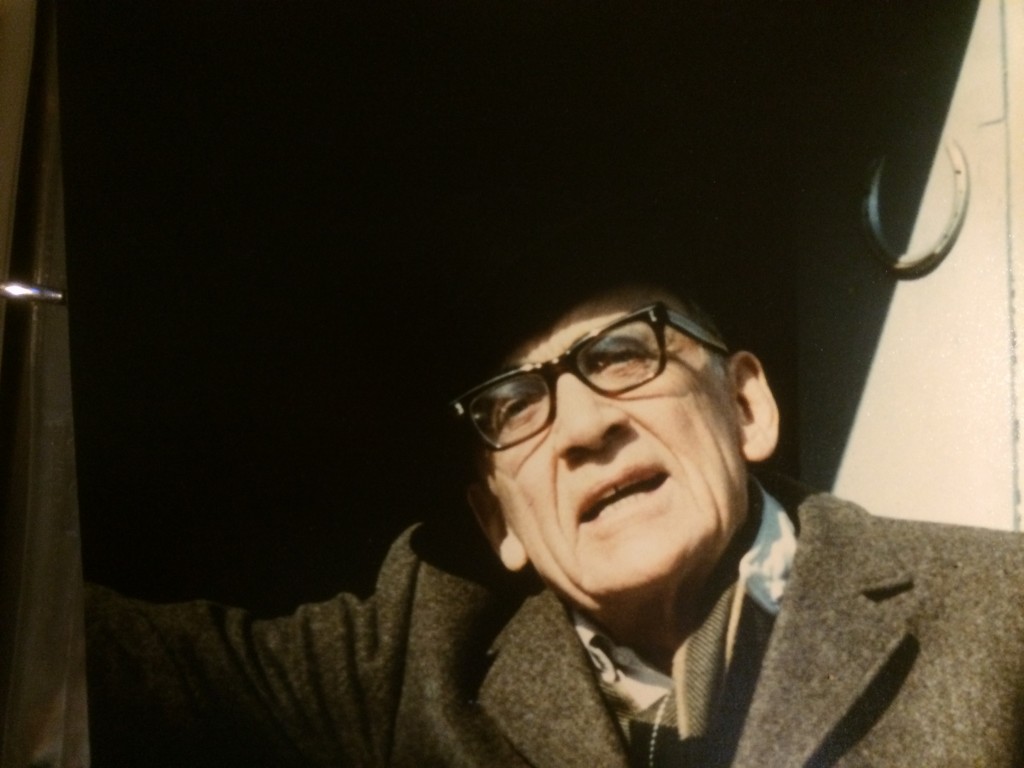 I believe this is Phil Mason

Perhaps the worst example of this is Yesterday’s Books, which isn’t even on Hollywood Boulevard, but since I’m digressing on the subject of overcrowding, it is impossible to overlook.  Yesterday’s Books is located at 451 N Western in a ramshackle old building that was probably condemned in 1910  Inside, you can find one of Hollywood’s most beloved bookmen, Phil Mason, sitting on a stool, smoking a cigarette, a half-finished bottle of Bourbon sitting next to him on a table, along with a loaded .38 revolver, philosophizing about the evils of government, and quoting such tid-bits as “You can do without diamonds, they’re only for looks, but a civilized man can’t do without books.”  But it is not the poetry or the philosophy that stuns you, it is the sixty thousand or so books all vying with one another in unashamed rivalry to violate Einstein’s theories of time and space. 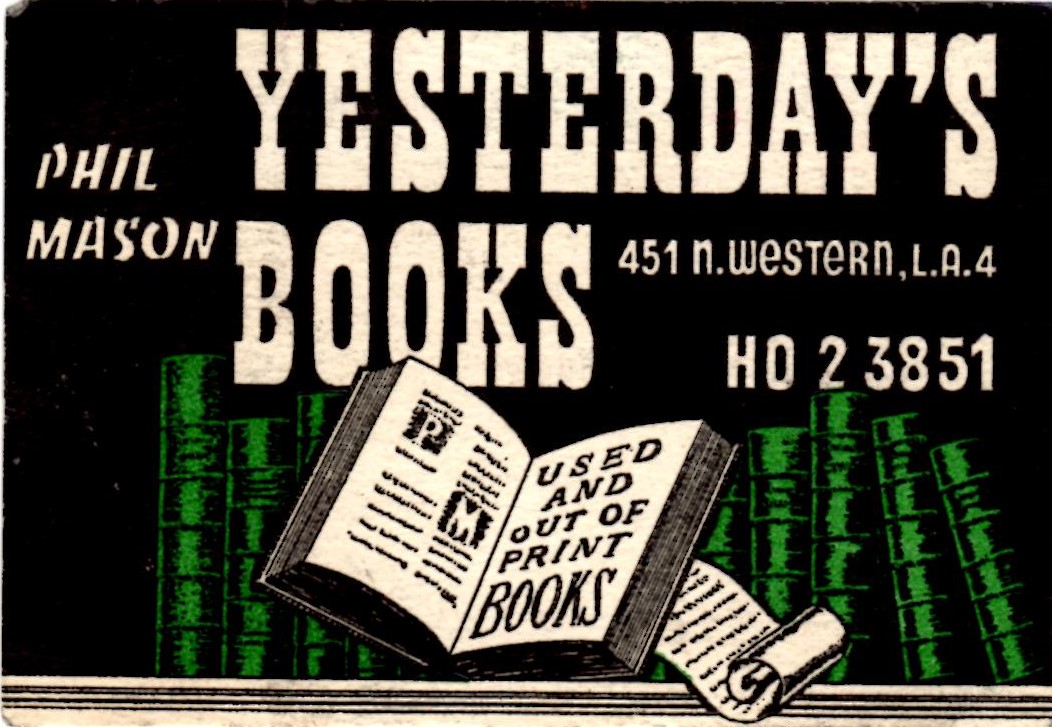 Mason later changed the name of the store to “Old Khayyam Books.”

Phil Mason, a man in his 60’s, was a noted Communist back in the 1930’s.  At some point, probably around the time of the Hitler-Stalin pact, he left the Party.  He is bitter about his years as a communist, and said that when he quit all of his former comrads were ordered not to speak to him, and he found himself isolated and alone.  Books were his savior, and he could find solace in them, leading him into the book trade.  Eccentric to the core, he at one point was furious with Pacific Bell telephone company, and ripped out the telephone and flung it out onto Western Avenue, where a passing truck crushed it into a plastic mess.  He never had a phone again.

His price for books, $1 each, is cheap enough.  He buys large quantities for a dime each, and when he discovers a gem it goes up the street a few doors north into a little office in the same building that he rents to store his better books for high rollers and dealers.  Flash a wad if you want to get his attention as a serious buyer.

At present, you can, with a little effort, force yourself down the aisles, squeezing between the shelves to find that “sleeper” worth twenty times the dollar that Mason is going to charge you..  It was about the middle of last year that the over-crowding situation had seriously deteriorated.  Over a period of several months cardboard cartons, heavy laden, had slowly piled up in the aisles.  On top of the cartons were piled more and more books, until entire sections of the store became a literal sea of knowledge, and I may add, it was one ocean where the human vessel could sail only with the utmost caution and difficulty, the specter of imminent shipwreck especially dangerous around the reefs of the history section.  Finally, one day I entered the shop to find passage totally blocked by a solid four foot wall of books.  Mason was perched on his stool, as usual, engaged in an animated, humor-filled conversation with a customer.  He was oblivious to the situation, or had given up hope, so with a passing wave I stormed the book piles like a French Grenadier attacking a street barricade during the Paris Commune.

Now, some people may think that was a horrible situation.  Not at all.  It was wonderful.  I tunneled, rooted and scrounged for hours, catching a short glimpse of the floor only once.  When I finally stumbled back out to the counter four and a half hours later, I felt smug knowing that the little pile of books and ephemera I clutched tightly in my blackened hands were worth far more that Mason was going to charge me.  It wasn’t until I got home that I realized the difference in price would be made up in laundry bills.  I smelled like walking book-must.

That was an extreme example of overcrowding.  I was in Mason’s recently and almost everything in the aisles had been sold or put away somewhere, and one can walk through the store in relative safety.  Maybe the Fire Marshall had been in the previous week and thrown a wild tantrum.  Maybe the decorators came in and scooped up a few million books for some movie set.  I was going to ask Phil, but he was grouchy and I noticed the Bourbon was almost gone from his bottle, so I decided to mind my own business and just look for some goodies now that they were more visible.  All in all, crowded or no, it is one of my favorite places, and I strongly recommend it.